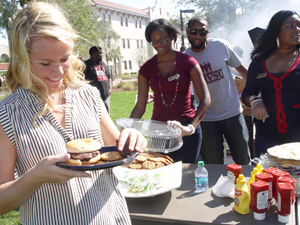 The SGA and CMVSU kicked off homecoming week celebration with a cookout Wednesday in Palms Quad in hopes of getting students hyped for the upcoming homecoming weekend.

The event, hosted from 1-4 p.m., was designed with one purpose in mind: unity.

“SGA wanted to be the organization to kickoff homecoming,” said Samuel Logan, secretary of Collegiate Men of VSU, SGA senator, and a senior journalism major. “Homecoming is for students, and we are the student government so why not start off homecoming with a cookout giving out free food.”

According to Logan, the cookout came at the perfect time

“It was perfect because it was on the same day as Wild Adventures,” he said. “So we figured people could come here and get free food, and then go to Wild Adventures for free—like a free VSU day.”

Amber Worthy, SGA vice president and senior mass media major, felt the cookout not only served as a morale booster, but made SGA more relatable for students.

“One reason we wanted to do this was to get SGA’s name out there,” she said. “Students don’t know who we are or what we do, that’s why we have some promotional items here which we will also be passing out at the parade if we have any left over. “

According to Logan, the cookout was originally planned a month ago and is the first cookout since the re-opening of Palms Quad.

“At the time of the planning, the senators that are members of CMVSU decided to collaborate with SGA again because we did a cookout last semester,” he said. “So we proposed it and it got passed.”

According to Worthy, about $3,000 was spent on food and free giveaways for 900 people.

Tyler Barker, an SGA senator and member of CMVSU, felt the collaboration at the cookout would be helpful to students.

“It basically brought about awareness of the things that students can do through SGA and also through CMVSU we are allowing men to becoming men of character and distinction,” he said. “It’s a win-win and a good look for VSU overall.”

“Now students can’t say that they don’t know what’s going on for Homecoming—because this is the first event,” Worthy said.