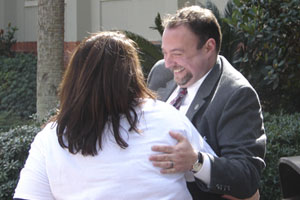 President Bill McKinney turned 50 on Tuesday, but was out of town for a conference in Athens that day and the day before.

While he was away, his wife, Dr. Dacia Charlesworth, and other members of the VSU community planned a birthday celebration for his return to campus on Wednesday.

As part of the celebration, code-named “Operation Nifty,” campus organizations created sheet signs that were displayed across campus, digital displays for the screens in the Student Union and signed cards for the president.

Dr. Charlesworth had signs and T-shirts printed. The signs were placed all over campus and T-shirts were handed out in front of West Hall Wednesday afternoon.

Dr. Charlesworth also baked cupcakes that she handed out to celebration attendees after Dr. McKinney had opened his gifts.

Shortly after 2 p.m., members of the VSU mass choir sang “Happy Birthday” to Dr. McKinney through his office window.

After being serenaded, the very s surprised president came down the stairs to receive his cards and gifts.

One of the gifts Dr. McKinney received was the “Giraffe Award” from the College of Arts and Sciences, awarded to people who stick their necks out.

Another gift was a jersey numbered “50” from VSU Athletics signed by members of the Blazer football team.

The Langdale College of Business endowed a scholarship in Dr. McKinney and Dr. Charlesworth’s names.

“You have no idea how much all this means to me,” Dr. McKinney said. “You better believe that this will only make me work harder.”