After spending ten seasons rebuilding Division I Evansville University’s volleyball program into contenders, Mike Swan now has the same opportunity to do so for the Blazers.

The veteran colligate head coach was announced Monday as the new helm of Valdosta State volleyball.
“I would like to thank President McKinney, Herb Reinhard (Athletic Director) and the rest of the Selection Committee,” Swan said in a press release.  “Everyone I met during the interview process had so many good things to say about working at Valdosta State and about the experiences that student-athletes have when they are members of a VSU squad. I am very excited to join the Valdosta State family and look forward to meeting the expectations that come with working at this University.”
Eastern New Mexico University head volleyball coach Sia Poyer’s successor will try to do what Poyer couldn’t during his tenure, that is bring the Blazers out of the shadows of rivals like West Florida and North Alabama in the challenging Gulf South Conference.
Swan is back coaching at the Division II level for the first time in 15 years, including five seasons at Morehead State where he earned Ohio Valley Conference Coach of the Year in 2001.
While only spending one season at D-II American International College in 1993, prior he spent three seasons at his alma mater Division III Manchester College (now Manchester University).
A member of the American Volleyball Coaches Association (AVCA), he began building his esteemed collegiate resume at NAIA Huntington College.
There he was awarded conference Coach of the Year in seven of his eight seasons as the head coach of the Foresters and led HC to eight district tournament appearances.
The Largo, Ind. native is currently 35th in active coaches in D-I ranked by wins.
“We were very pleased with the strength of the pool of applicants for our position,” Reinhard said in the same release. “As we expected, there was considerable interest in the coaching the program at Valdosta State and I feel strongly that we have found a tremendous new coach to lead us forward.”
Eric Jackson 2013-02-27
Rebecca McAleer
Share

Previous Abuse of disabled parking permits
Next Bleu Pub: local, ‘much classier than a bar’ 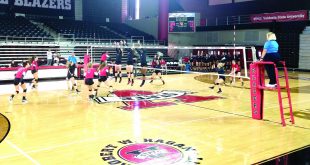 Written by Kimberly Cannon, Staff Writer Following two wins and one loss this past weekend, ...