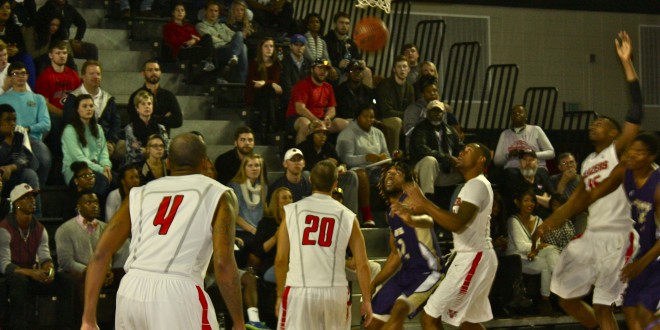 Blazers hope to keep up streak

It was a Blazer’s total take down, but now they hope to regain that confidence against Shorter University tonight.

The Blazers defeated the conference-leading Chargers on Jan. 22 against the University of Alabama-Huntsville.

With a late three-pointer from Josh Lemons, sophomore guard, and a key block from Colin Cook, senior forward/center, the Blazers were able to maintain a 67-66 lead and get a big win against the Chargers.

James Spencer, senior forward, and Jeff Nibo, junior forward, led VSU in points with 19 and 15, respectively. The Blazers were able to do exactly what they wanted to do against UAH—tighten up on defense and improve their three-point field goal percentage.

On Jan. 24, the Blazers took on the University of North Alabama, but fell short 95-79. UNA was able to out-rebound the Blazers by 15 and scored 29 second-chance points as a result.

The Blazers are now 9-10 overall and 4-9 in Gulf South Conference play.

The Blazers were defeated by the Hawks earlier this season, on Dec. 15, by a score of 98-94. The Hawks came in with a quick lead in December but the Blazers came stomping back in the second half to score 20 points.

SU fought back to eventually claim an 80-78 lead with only two minutes and twenty-three seconds to go. After a back-and-fourth leading game, the Blazers came back once again to end the official game play with an even score of 85-85. The Blazers went into overtime but were unable to come out victorious.

The Blazers hope to bounce back and make a run in the GSU, as the rest of their games are in-conference starting with a hopeful bounce back against SU.