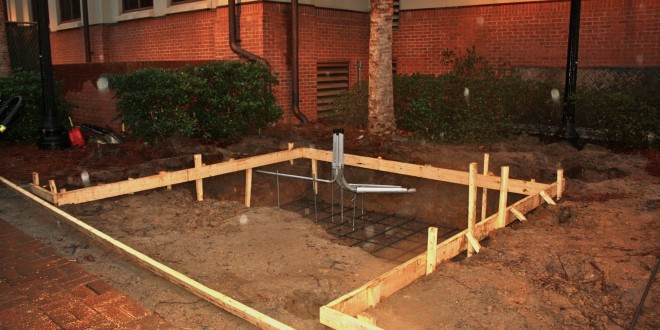 Construction on a new campus ATM began Feb. 2 The ATM will be in front of the Student Union and should be ready by mid-March. (Credit: Stella Henderson)

New ATM in the works

Construction began on Monday for a new ATM to be located at the northwest corner of the Student Union.

The ATM located at the University Center will remain open during the two-week construction of the new ATM, although the new location will not go live until mid-March.

“Part of the construction for the new ATM is that there will be additional hall lights that will be provide an abundance of large LED lights which should benefit the safety of the students,” said Alan Sanderson, interim assistant director of facilities planning.

Sanderson conceded that while there are less people at the UC during evening hours, the school’s hope is that the new ATM’s prime location just north of the Student Union will make for a safer, more visible location.

“The decision to put the ATM in the Student Union was an easy one because it is the heart of the campus,” Sanderson said.

The new ATM is similar to the old one and is still in conjunction with Bank of America. Plans had been in the works for this ATM location since 2010 when the University Center opened but was only recently put into action due to safety and security concerns.

Students seem to think the new ATM location would have a positive effect on campus.

“I’m really glad to have an ATM closer to people because the one at the UC is the go-to spot for mugging, so having one closer to civilization should deter robberies,” Josh Daniels, junior history major, said.

“I think this will minimize traffic and lower safety concerns from people that have to travel to the UC at night to use the ATM,” Jared Scott, senior psychology major, said. “However, with an ATM there now, as with all ATMs, there will be an increase in risk and danger there as well.”