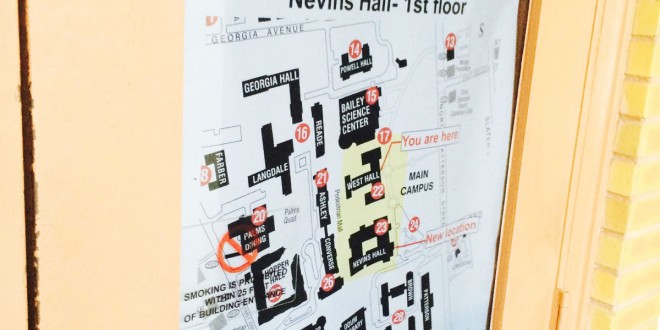 West Hall renovations, which are costing VSU $2.5 million, are ongoing and are scheduled for completion in Summer 2015. (Credit: Tyra Mills)

The West Hall renovations that began in Spring 2014 are still in full swing this semester, and the total cost of these renovations is a whopping $2.5 million.

In 1985, the layout for West Hall renovations contained an air conditioning plan that was not prepared for the amount of heat from electronics.

“The air conditioner was 30 years old and was nearing the end of its life cycle,” Raymond Sable, VSU director of physical plant and facilities planning, said.

The first stage consists of replacing the system with a current and more effective energy system for the classrooms, which will cost $916,403. They also will add new whiteboards to the classrooms, rearrange computer labs to improve Internet connection, and replace the carpet and paint.

The second and third stage include switching the air conditioning system for the north and south administration wings.

With all three stages calculated together, the total cost is $2.5 million.

Sable also said the reason they waited to replace the air conditioner system during the winter season was because doing the project in the summer allows for greater damage to the building due to high temperature.

The professors whose offices are in the West Hall construction zone have been relocated to temporary offices.

West Hall will continue to undergo improvements until each section is completed, and many students will be alright with the wait.

Nick McLendon, sophomore mass media major, has classes in West Hall and has little fuss over the improvements there.

“I think the changes are great because it is cooler in my class and West Hall looks much nicer with the improvements,” Booth said.

Elizabeth Fish, senior English major, thinks the changes to West Hall have been good overall since they mean our campus will be better in the long run.

“I find it comforting to know that I can walk to class and not worry about it being too hot for me to focus on my studies,” Fish said.

These renovations should be completed in Summer 2015.

Previous Our point of view…
Next Baseball prepares for first doubleheader