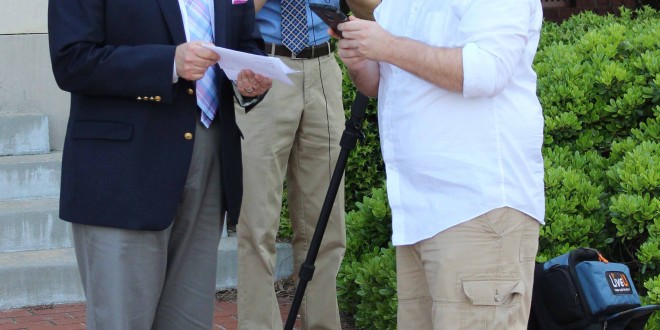 VSU President William McKinney held a press conference on the Front Lawn at 6 p.m. Tuesday, minutes after campus police issued an alert announcing a manhunt for a VSU student.

In the alert, which was issued to students Tuesday at 5:44 p.m., police reported that a gun was found on campus that was linked to student Eric “EJ” Sheppard. Sheppard was called “armed and dangerous,” though police said Sheppard was not believed to be on campus at that time.

Police are now searching for Sheppard, who was involved in a protest last Friday. During that protest, Sheppard and others walked on an American flag before veteran Michelle Manhart attempted to take the flag, drawing widespread criticism and support for both parties.

Dr. McKinney said that in Sheppard’s case, it is no longer a matter of protest and free speech.

Posts on social media showing Sheppard with weapons, in conjunction with an increased police presence on campus, resulted in campus-wide panic Tuesday afternoon.

“There is one (thing) that’s false: that says we are on lock down; we are not,” said Andy Clark, VSU vice president for enrollment, marketing, and communications. “We had an incident, and it was very serious, but at the same time the police responded properly. Basically we think that any threat to campus is kind of non-existent. We reached out to campus police; they have his picture and are all looking for him.”

Sheppard was also present at a campus protest on April 20 that featured hundreds of students, veterans and Valdosta citizens converging to show support for the American flag and to promote unity among races. Sheppard argued with protesters for hours on issues such as white privilege and supremacy, and the proper treatment of the American flag.

Anyone with information on Sheppard’s whereabouts can call University Police at 229-333-7816 or 911.