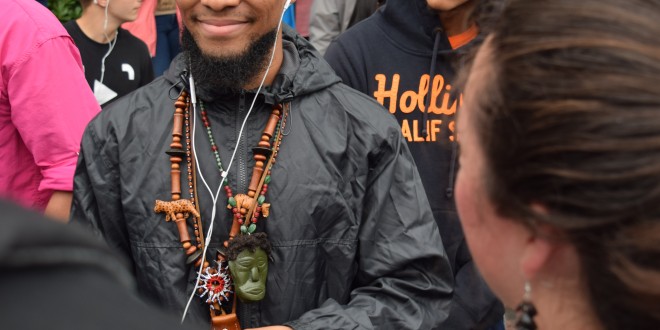 Valdosta Police Chief Brian Childress expressed his annoyance Monday over a group of supporters claiming that his police department is treating Eric Sheppard wrongly, just as Sheppard’s family has hired a lawyer who is calling on the community to support what they are referring to as a “protestor’s activism.”

Sheppard created a national media firestorm while walking on an American flag during a self-initiated protest on the pedestrian mall on April 17. Sheppard is now wanted by police who consider him to be “armed and dangerous” after a gun was allegedly found on campus on April 21 in a backpack belong to him.

The “Eric Sheppard Support Initiative” group set up on the fundraiser site Indiegogo Life has a total goal of $20,000 to bail Sheppard out of jail if and when he is located and arrested. The website has raised nearly $1,300 as of press time, and refers to the Valdosta police as “pigs.”

The group is also trying to raise several thousand dollars to provide food and shelter for Sheppard once he is bailed out.

“Mr. Sheppard is wrong here, not law enforcement,” Childress said on Monday, according to WALB-TV. “I’m sick of people saying that we’re treating him wrong, or we’ve done something wrong to him or he’s in fear for his life. Fear of what? He’s the one who brought a gun to campus.”
Childress warned about the use of money to help Sheppard avoid being arrested.

“If we find out you’re harboring him, and I can prove it, you’re going in handcuffs,” Childress said.

The group is planning to come to Valdosta and hand deliver the bail money to Sheppard’s parent if he is arrested.

“We have a history of representing activists who have lifted their voices in order to shine a bright light on social justice issues in America,” said attorney Mawuli Davis of the Davis Bozeman Law Firm in metro Atlanta, according to the Valdosta Daily Times. “EJ is a new young voice that we cannot allow to be silenced and criminalized. He is worthy of our support and the support of the community.”

“The bag was not found in Mr. Sheppard’s possession,” continued the statement. “He has been active in the fight for justice in the Kendrick Johnson case and has demanded an end to systemic racism.”

Community activists are expected to join the law firm at a press conference at 2 p.m. today in Decatur to urge for what they are calling “the safe surrender of Eric ‘EJ’ Sheppard.”

The effects of the protests were still being felt across campus on Wednesday evening.

“I feel like he should have gone about getting his point across in a better manner,” said Deja Merritt, sophomore, mass media major. “He should accept his consequences because he didn’t have to go about doing it in that way.”

“I just don’t think the whole thing should even be on campus,” said Copeland Felts, senior computer information science major. “If there going to do whatever, then it should just be dealt with off campus. As far as raising money, I don’t see what there would be a cause to raise money for besides maybe his bond.”

Previous Letter to the Editor: McKinney leads well during times of controversy on campus
Next You are VSU, be proud to be a Blazer!