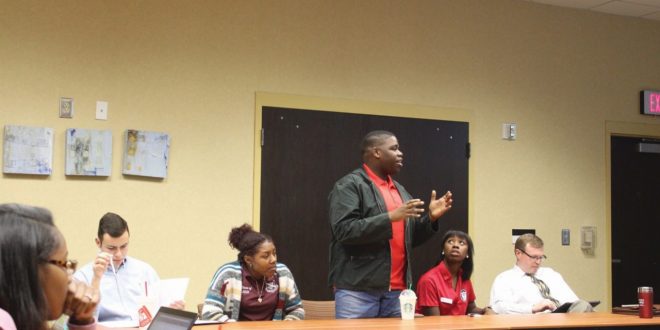 It’s only four weeks into the new semester and the Student Government Association has already made substantial changes for the future.

Monday’s weekly meeting began with Sen. Adam Slaton being sworn in as the new vice president of SGA. The former vice president, Othellious Cato, stepped down from the responsibility.

The vice president job – or any position of power – was not something that Slaton aspired for.

“I never intended on being a member of executive board,” Slaton said. “It was very sudden that the position became vacant. There were some efforts to create a vacancy, but I never wanted to fill that vacancy.”

Slaton said it took encouragement from President Maya Mapp for him to accept his nomination. He also said Mapp has become one of his closest friends, which speaks volumes because their first conversation was at The Happening in August.

“I didn’t know Maya Mapp at the beginning of the school year,” Slaton said. “I would consider her a close friend now, and I didn’t even know her six months ago. She has made my transition so welcoming, as well as the other executive members.”

Part of Slaton’s new role as vice president is conducting the weekly meetings. During the meeting Slaton was in charge of discussing the revised SGA Bylaws.

Slaton, as well as Sen. Silas David and Sen. Dillon Rountree, revised the Bylaws and brought it to the floor to be discussed.

The senators discussed and added amendments for more than an hour before finally voting to pass it. This is the first time the Bylaws have been revised since 2013, and it is only a small step of the new rebranding SGA is attempting to achieve.

The next topic on the agenda was the literal rebranding of SGA. Senator Amea Thompson brought forward three provisional logo ideas to the floor.

None of the designs were approved by the senate, but it did give Thompson a feel for what the other senators were looking for.

Nominations for Speaker of the senate was the last topic on the agenda.

Two of the newest senators were both nominated for the position: Jacob Bell and Jalah Morris. The vote to confirm them was tabled for next week.

Mapp said she is proud of the senate and was visibly excited at the progress they’ve made.

“To finally have these big structural changes finally implemented, it’s super cool to see.” Mapp said with a smile. “That probably isn’t the right word to use, but it is cool to see that change. I think this will benefit the student body in more ways than one.”

The change she is referring to is a switch from the typical three branches of government to a higher education system.

The system is changing from judicial, executive and legislative branches to having four independent chambers in SGA. A chamber of finance, a chamber of campus activities, a chamber of academic affairs and a chamber of outreach and public relations.

“That’s perfect, not only doing that internally but to be able to share that externally with the whole rebranding of SGA,” Mapp said. “I think that’ll be great, and then we can really get back to what we’re supposed to be doing when it comes to servicing the student body.”

Mapp said SGA does hear students, and they were able to host students at a concern table, where they got better insight on what is important to students. She said they are trying to get to the point where they can help students with those concerns.

Part of that process is contingent on the relationship between SGA and new school president Dr. Richard Carvajal.

“I can say, confidently, with the leadership of Dr. Carvajal, we’ll be moving in the right direction,” Mapp said. “He was awesome to speak with, and he has great initiatives for SGA to tackle. He’s open to listening to what students have to say and what’s going on on campus.”

Mapp said SGA is currently collaborating with the president’s office to have listening sessions with Dr. Carvajal in the near future. She also said that SGA should be the open connection between students and staff. She said in working with Dr. Carvajal, the campus as a whole can advance, but her personal focus is advancing students.

“My main goal for May is to regain that rapport [with students],” Mapp said. “My first semester serving as SGA president did not go how I thought it would, but you have to understand how to overcome trials.”

Mapp said she understands that goal may not happen overnight, but it will be something she continues to work towards through May.