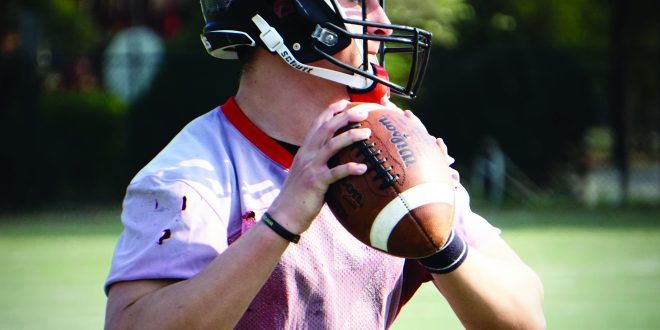 The defense performed up to Bell’s praise throughout the season, even in the first round exit against UNC-Pembroke where they had five interceptions.

The Blazers defense lost key members of the team such as Kenny Moore, Egim Etta-Towa and Donatello Brown to graduation, but personnel changes weren’t the only ones made to the defense.

Linebackers coach Danny Verpaele was promoted to defensive coordinator earlier in the semester and it was announced at the same time that there would be two new coaches joining his staff.

With the loss of players and change of coaching staff, it will remain to be seen if the defense will live up to the high expectations left by the 2016 Black Swarm.

There will be no accurate measuring stick for the defense until the 2017 season opens in August, but through spring practice there is a taste of the energy and aggression that will be featured this fall.

Despite not toting the big names that the Black Swarm did last season, Bell has faith in his players and his staff.

“It’s tradition,” Bell said. “Our coaches are doing an outstanding job. Verpaele is a guy that brings a lot of juice, and as a defensive coordinator, he’s bringing his personality to his players.”

Bell noted that while the Black Swarm had much success last season the area that they were strongest in was their secondary.

Last season, the Blazers led Division II in interceptions with 27. With the many changes on the defensive side of the ball, the number will probably drop. One thing that won’t change is the system the defensive backs are in under David Rowe.

“There was constant conversation [with James] last year,” Rowe said. “I knew the players before coming in. I’m very familiar with who we have and who has the potential to start. I’m just getting to know the guys outside of football and trying to put faces with names.”

The transition to being on staff with VSU was fairly quick, but it was not rough because of his relationship with his brother.

“It was quicker than I expected … we were doing football stuff pretty early,” Rowe said. “My brother and I share a lot of ideas, so I knew the defense coming in. Working with the guys was new, but I think that’s coming along great.”

For all the changes on defense there is still a constant on offense, Roland Rivers was in a sling for the second consecutive week at practices. As the days inch closer to the spring game there’s no guarantee that Rivers will be participating.

Rivers’ absence is not preventing Bell or any other Blazer from having the conscious effort to not have next season end as the last did.

“I love their desire not to be 8-3 again,” Bell said. “You want a team that has the ability to say we’re going to be better than that. There’s an expectation level not only from the coaches but I think the players know it too.”

VSU’s spring will culminate on April 8 after the annual spring game.