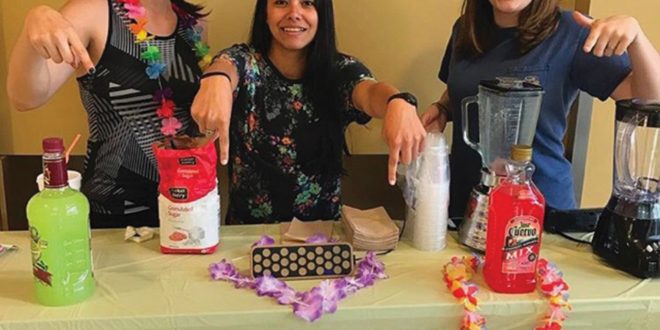 Founded in 2014, the Spanish Club practices the Spanish language and strives to enlighten people on the Hispanic culture by incorporating information about a specific Hispanic country at each of their meetings.

Every Wednesday, the members volunteer to tutor students who are having difficulty with their Spanish classes. Every fourth Thursday of the month, the members host a Bailando Dance Fiesta where students can eat chips and salsa and take free dance lessons.

“The reason that we have been holding more events is because we have a great executive board connection that allowed us to be more organized,” Johnson said. “We all share the goal of expanding our organization.”

Johnson also elaborated on what she likes best about the Spanish Club.

“Even though we are small, we are getting our presence known and also how the members are very active with the organization,” Johnson said.

Courtney Burten, president of Spanish Club, has been a member since it was founded and enjoys helping with Spanish events.

“Everyone is inclusive in the Spanish Club,” Burten said. “We are a group of students who are very diverse and love studying both the language and culture of many Spanish speaking countries.”

Recently, the Spanish Club hosted a “Blended Drinks” event in the Student Union where they made drinks for students to enjoy.

Other events during the school year include “Dinner and Dancing,” “Bridging Cultures” and Bailando dance lessons.

The Bridging Cultures event is the biggest event hosted by the Spanish Club. It involves inviting all culture and language-based organizations to help them understand the cultures represented by each organization. In turn, this allows students to bridge the culture gap.

Amber Baugh, vice president of Spanish Club, joined the Spanish club during her freshman year in hopes of brushing up on the Spanish language. In turn, this made Baugh want to continue learning Spanish, so she could become bilingual in order to help people of Hispanic descent.

“I enjoy having the opportunity to educate people on the Hispanic culture, whether it’s about their holidays or just their way of life,” Baugh said. “I’m actually a psychology major, but I’m putting a focus in my Spanish electives, so I can eventually become bilingual.”

Johnson also shared her insight on why she was interested in joining the Spanish Club.

“What made me join the Spanish Club is that they had a Dinner and Dance last semester, and I really wanted to go,” Johnson said. “I enjoyed it and since I have a minor in Spnaish, it will do me godo with practicing my Spanish.”

Whether a student is fluent in Spanish or just wants to brush up on their Spanish, the Spanish Club accepts any undergraduate student who maintains a cumulative GPA of a 2.0 or higher, regardless of major.

In order to join the Spanish club, a student must pay a $5 membership fee or $15 to receive a Spanish Club t-shirt.

If a student wants to join the Spanish Club, they can contact, Dr. Grazyna Walczak, the club advisor.

Previous United Airlines cause uproar over attire
Next Where are our girls?