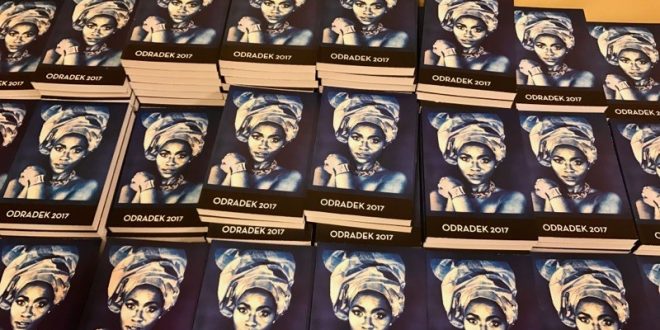 The Odradek: VSU’s Literary Arts Magazine, hosted its annual unveiling and gala celebration for the 2016-2017 issue on Thursday, May 18, in the UC Theater.

For the past 25 years, contributors and editors have submitted their work to the Odradek which is filled with writings of fiction, poetry, nonfiction, translations and visual art.

During the event, students who contributed their work to the Odradek were invited on stage to read their writings.

Jacquelyn Moore, contributor to the Odradek, read her piece to the audience entitled “Fire in My Veins.”  Her story was a non-fiction piece that dealt with her night in the hospital, and the issues she had while giving birth to her baby boy.

“At seven months pregnant my obstetrician found out through a sonogram that my baby was a boy and that he was breech,” Moore said when reading her story. 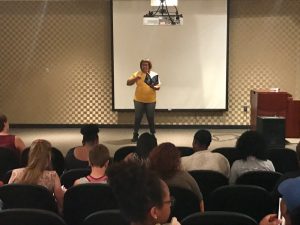 Jacquelyn Moore, reading her piece “Fire in my Veins.”

In addition, Heather Burns, fiction editor for the Odradek, read her fiction piece entitled “Porcupine” which was about three friends hiking through the woods and their encounter with a porcupine.

This year, Misti Allen and Haylee Friel were the managing editors who ran the event and oversaw the production of the Odradek issue.

Friel said her favorite section of the issue was the art work.

Friel said that she originally began working with the Odradek by taking creative writing classes with Dr. Jeffery Vasseur who is the faculty advisor for the Odradek.

“I served as a Translations and Art Editor first, though with my experience I eventually worked as co-head editor with Misti for my senior year,” Friel said. “I felt that by seeing others pieces, we could really expand on our own writing and help others as well. I had a great experience with being able to interview Jane Smiley with OnTap, and with Odradek, I came to really understand the several backgrounds and experiences of our submitters.” 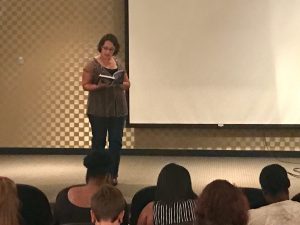 The cover artist for the Odradek issue was featured by Lauren Jones. She titled her piece “Nigerian Queen.”

“Out of our submissions this year, I was really taken with some of our art works, as I also served as Art Editor in conjunction with the Editor in Chief role, as I feel many of our art submissions this year came from an excellent, multicultural range of backgrounds and each were beautiful,” Friel said. “I always have a hard time picking a favorite, whether it’s visual, or written!”

Dr. Vasseur informed students about the origins of the Odradek’s name.

“For those interested in the origins of our title, it comes from one of the most influential masters of 20th century Modernism, Franz Kafka, who first deployed his neologism in a little short piece entitled ‘The Cares of a Family Man,’” Dr. Vasseur said.