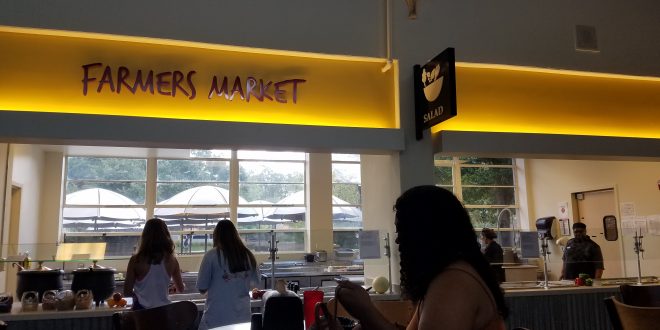 Over the summer VSU underwent a major renovation in Palms Dining Hall for the first time in 11 years.

“It was time for change,” Lynn Darsey, assistant director of Auxiliary Services, said.

The university invested $1.5 million in order to bring students a new dining experience. When it comes to the changes in the dining services, I have some likes and dislikes.

Palms is a little more colorful this semester with a change to its interior. Lighted and multicolored signs were added to each station as well as personalized logos.

Some necessary replacements were made to the dining hall. VSU installed a new HVAC system in the north wing of the building, a partial roof replacement and a new dishwasher.

“Changes were made to the serving stations throughout Palms Dining to increase options and improve efficiency,” Darsey said.

Dining added crowd control posts to help guide students into more functional and space-conserving lines. These posts can be spotted by the Grill and Home Zone food serving sections.

Some serving stations have been added or changed. The Home Zone gained a rotisserie and carving station and the Deli relocated to the Farmers Market near other healthy options to create unity. The omelet station was also moved to a single station and a sushi station was added.

The renovations to Palms Dining are nice—definitely an improvement from the colorless and bland look of last year. The updates to the stations have given employees more space to work.

Not only has the interior of Palms undergone a change, but other parts of Dining Services have as well. The meal exchange program expanded to include meal swipes at Chick-Fil-A and Which Wich.

I do love the additions to the Meal Exchange program; it gives student more options to choose from.

Monday through Friday after 5 p.m., students can use a meal swipe at Chick-Fil-A. On Sunday, they can do a meal exchange at Which Wich.

Another major change is Blazer Sports Grille’s return to a residential dining facility for late night dinners. It now features a Mongolian grill, a new and popular addition to VSU’s dining.

“Even with these exciting changes, we did not increase meal plan rates for this year,” Darsey said.

For the most part, students like the changes made to Palms Dining.

“It definitely looks better than before,” Nathan Pettway, a sophomore undecided major, said.

“It looks nice,” Kayla White, a sophomore early childhood education major, said. “I like it.”

When it came to changes to Blazer Sports Grille though, there was some controversy among students.

“The food at the Grille is basically the same food at Palms, and I hate that,” Jael Stanton, a sophomore chemistry major, said. “It was a major downgrade.”

“I liked it better when they took orders, and I could get wings and curly fries,” White said.

I don’t like the changes to Blazer Sports Grille because it is too similar to Palms now. I liked the change in food options and ambiance that the Grille offered, but now it has changed to an extension of Palms.

Even though students don’t seem to be liking the changes made to Blazer Sports Grille, they do seem to be loving the meal exchange expansion.