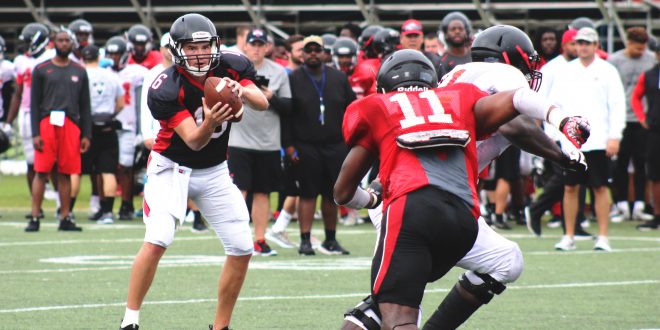 Blazers looking to scorch the Rams

The Blazers will look to keep their season opening streak against Albany State going with a victory on opening day.

In December, the 2016 Blazers were eliminated in the first round of the Division II playoffs. Head coach Kerwin Bell is entering his sophomore season at VSU and is looking to improve on the early exit from last season.

“I think we’re in good shape, there’s so much competition in each position,”Bell said.“We just got to narrow it down to just our specific guys that we’re going to go to war with and get our execution level ready to go.”

Last season the Blazers were plagued by a quarterback competition between Roland Rivers and Adam Robles that extended over the course of the entire season. This season the team has a solid starter guy in Robles. Meanwhile, Rivers is sidelined while he recovers from surgery.

Bell showed the fruits of a full recruiting season by adding weapons to his offense this offseason in the form of two DI transfers, De’Sean Blair and Ron Johnson. Blair is a wide receiver that transferred from the University of Missouri. He brings another deep threat for Robles. Johnson, a running back transfer from the University of Connecticut, will be headlining the backfield for the Blazers this season.

One familiar face for the Blazer offense will be senior wide receiver Dallas Baldner. Baldner was second in receptions and yards last year and tied for most touchdowns receptions.

“It’s sort of bittersweet ending my last fall camp but I had a great year my sophomore year and an even better year last year. Going into my senior season I feel like I’m going to have a real big year,” Baldner said.

Bell is known for his offensive prowess, but the Black Swarm defense anchored the Blazers last season. Danny Verpaele moved into the defensive coordinator role, David Rowe is the new cornerback coach, and Willie Tillman took over the defensive line coaching responsibilities.  Despite changes at the coaching position and losing players to graduation, they are expecting no less success this season. 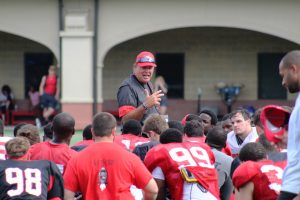 The Blazers led the nation in interceptions last season with Roe and Palmer both finishing top-10 in the conference for interceptions.

Sept. 2 marks the long-anticipated kickoff of VSU’s football season. The Rams went 5-4 last season and scored an average of 23 points per game. They haven’t fared well against the

Blazers recently. They will look to extend their eight-game win streak against the Golden Rams. Last season, the Blazers only allowed one Albany State touchdown in a 16-7 victory.