Home / Sports / What’s Your Take: Blazers best in the state? 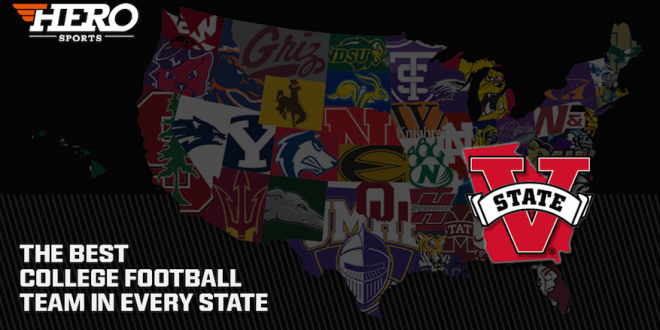 Hero Sports selected Valdosta State as the top collegiate football team in the state of Georgia.

What’s Your Take: Blazers best in the state?

Despite getting burned at the end of their 2016 campaign, the preseason accolades keep coming in for VSU Football.

In December, VSU fell in the first-round of the Division II playoffs against UNC at Pembroke. Even with having home field advantage and five interceptions by the Black Swarm, the Blazers couldn’t find their footing on offense.

The early exit had no effect on expectations this season around the conference and nation for VSU.

The Blazers were predicted to finish second in the Gulf South Conference by coaches. Five players were selected to the preseason all-conference team, including quarterback Adam Robles.

If that news wasn’t big enough, the Blazers were announced as the No. 11 team in the Division II coaches poll. A week later, Hero Sports chose them as the best college football team in the state of Georgia.

To put the cherry on top of a rewarding offseason, three Blazer games will be picked up by ESPN3.

On Sept. 16, the Blazers will face the No. 6 team, North Alabama, in the first home game of the season. On Oct. 7, the Blazers will travel to Carrolton, Georgia to face West Georgia in the hottest rivalry in the GSC. The next week, the Blazers will return to Bazemore-Hyder Stadium to face Mississippi College.

With all of that being said, how did we get here? While the state of Georgia doesn’t have the brawn of Florida or Alabama, declaring a Division II school the best colligate team in the state is a big pill to swallow.

There is truth in that selection though. If you take away labels and look at on-field production, the facts are hard to dispute.

The Blazers are the only team in the state with a national title in the last five years. Coupled with their constant playoff appearances, the choice isn’t wrong.

It does present another question: Can the Blazers live up to the expectations that have been set for them?

The expectation for the Blazers is to compete on a national level every year. That’s not new. They receive national recognition every year.

The real question is can head coach Kerwin Bell intertwine his culture with the already set expectation for VSU and create a dynasty?

In his first year, he surpassed his own expectations by making the playoffs with a short recruiting season. After having a full offseason to recruit, he’s shown his commitment to go after big names.

He’s added transfer players from Division I schools such as Ron Johnson and De’Sean Blair, who could potentially have an immediate impact on his offense.

He also recruited freshmen that can have a long-term impact in his system such as Kenny Benjamin and Wesley Veal.

However, his kryptonite seems to be a decisive selection on quarterback.

Last season, Adam Robles was a backup for VSU who split time with Roland Rivers until Rivers went down with an injury that has stretched into this season.

It would seem that Robles would be the automatic starter but in a recent interview, he told the Valdosta Daily Times’ Derrick Davis that he was not set on a starter. He spoke about the strong offseason of Rogan Wells, who hasn’t taken a single snap in a live game.

It doesn’t matter if Wells or Robles is the starter on Saturday, but what does matter is if the Blazers are going into a season long quarterback competition.

Whatever the case may be, the nation is watching. After all of the accolades, if the Blazers have another mediocre season, it may be time to reevaluate if mediocracy is the new expectation.