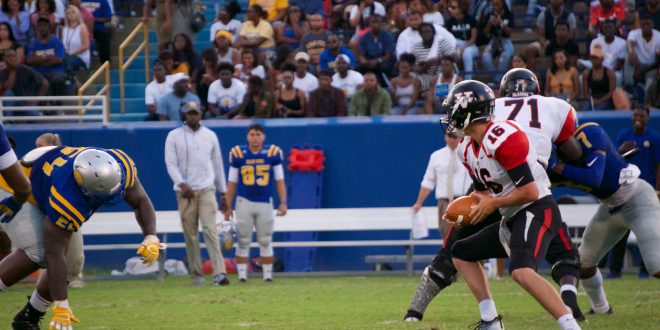 Rogan Wells is going to be the starter for the Blazers on Saturday.

Blazers look to get their swagger back at Okefenokee Classic

The Okefenokee Classic offers a chance for the Blazers to right the ship.

Before entering the first game of the season the Blazers were ranked No. 11 in the nation. After folding up against unranked Albany State in a 26-12 loss, the VSU Blazers fell out of the rankings and catapulted the Wildcats to the No. 20 ranked team in the nation.

In a game that was expected to be a walk over win for VSU, the Blazers failed to execute on multiple scoring opportunities and couldn’t take care of the ball. They continued to beat themselves with numerous penalties, resulting to over 100 yards negated to VSU.

“We had five or six situations that would’ve lead us to score if we had capitalized on those situations,” VSU head coach Kerwin Bell said. “Our big thing for us is that we want to win the turnover battle, we want to win field position, we want to play well on special teams, and be a physical football team. I think three or four of those we didn’t get done and that’s how you lose games.”

The redshirt freshman made the most of his time by connecting on two touchdowns and throwing for 141 yards. Wells also was the Blazers leading rusher with 62 yards, and did it all in just two quarters of play.

Bell said he liked what he saw from Wells and named him the starting quarterback over Adam Robles for the upcoming game against Fort Valley State University on Saturday.

“I’m going to have Adam ready and he’s going to be our backup, but we’re going to go with Rogan,” Bell said. “We named him the starter and it’s going to be his game to win, and we’ll see what happens.”

Unleashing the running game will be immense help to the Blazers’ scheme this week against Fort Valley. University of Connecticut transfer Ron Johnson was limited to only nine carries for 38 yards against the Rams. The three tailbacks that carried the ball, they produced only 47 total rushing yards and no touchdowns.

This Saturday, the Blazers will face off against the Wildcats in the Okefenokee Classic. For the Blazers, this game is more than just a week-two matchup. Giving up another game that should be an easy win will jeopardize the Blazers championship aspirations.

“We hope to get the run game started, that’s one thing we’re really working on,” Bell said. “We must be more physical at the point of attack in the run game. Fort Valley is a physical football team, they’ve got good size. We have to be able to move those guys and execute at a high level if we want a good running game; and we want that so we need to go and play extremely well.”

Fort Valley’s defense gave up 305 rushing yards in their season opener against West Georgia. If the Blazers rushing attack gains traction this weekend, it can be used to establish some versatility for Bell’s pass-heavy offense.

The game will be held at Waycross Memorial Stadium on Saturday at 7 p .m. Tickets can be purchased from Student Life on the second floor of the Student Union.

The countdown has begun until winter break is here and then New Years is just ...