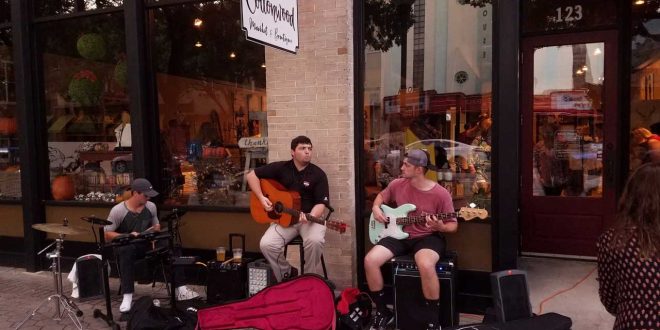 Bands play both on the street and inside businesses on First Friday. From left: David Wortham, Dustin Barrett, Grant Gardener.

For more than 10 years the city of Valdosta has held a celebration to commemorate downtown city life on the first Friday of every month.

“It’s a celebration of the heart of the city,” Missy Smith, main street coordinator, said. 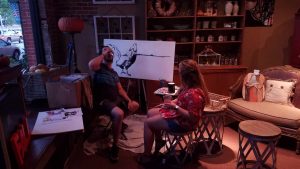 Smith said First Friday is an effort by the city to get people from all over the Valdosta community to experience downtown.

Smith said that since their target audience is locals, the city wants VSU students to come downtown instead of focusing on Remerton.

First Friday is also good for businesses since they receive a lot of foot traffic during the night. Red Door Records owner Jessica Ganas said her shop is usually packed on first Friday.

“We have a full house every First Friday,” Ganas said. “Standing room only.” 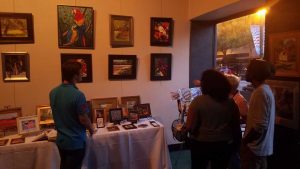 Ganas said Red Door Records usually gets a lot of business through their live jazz band and monthly art studio.

Loftis said the Bleu Café has to prepare for more than the usual amount of customers on First Friday.

“We do almost double business, but we have more people staffed so that it all goes smoothly,” Loftis said.

Another reason for the large influx of business is the exception to the open container law on First Friday.

“It’s the only night of the month that, legally, they (law enforcement) allow you to have an open container of alcohol outside,” Ganas said.

Smith said all participating restaurants carry commemorative First Friday cups that are put out for customers to buy. After filling their cup, customers are able to explore downtown without receiving an open container charge.

“The idea is to not go to one place and stay seated,” Ganas said. “You get your drink, and you can go into every place downtown.”

Smith said the city is currently working on plans to get a regional audience, but First Friday is still here for locals.

“It’s a really good night to have a lot of people come together, hang out and listen to music,” Ganas said.

Previous Updated Hurricane Irma Forecast as of Sept. 7 at 11 p.m.
Next The Spectator’s September flick picks