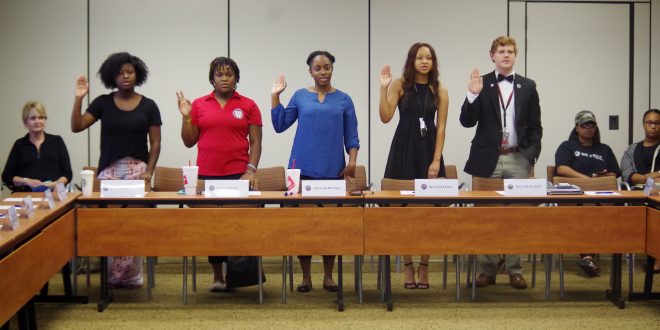 New SGA members being sworn in

At Monday’s SGA meeting,  Vice President Aisha Johnson spoke about the Homecoming plans for this year. As the voice for the students, SGA wants to make sure homecoming week will be one to remember.

“Homecoming will be Oct. 30 through Nov. 5,” Johnson said. “We want to go big this year. Last year when Big Nick’s catered, we also had floats and a really great time.”

“The theme for this year is Masquerade, and as soon as CAB and the Firepit send out the events, we will get those out as well,” Mapp said.

SGA President Maya Mapp swore in new inductees of the senate as they recited the Oath of Office. New senators will now be able to serve on any of the 12 university committees and individual chambers. Chief-of-Staff Adam Slaton then explained the three governing documents of SGA: the constitution, the bylaws and Robert’s Rules of Order. Robert’s Rules of Order governs the code of conduct and guidelines for SGA meetings.

Mapp explained the new senator’s responsibilities. Senators should get involved and make sure they do their job as new members of the senate. SGA considers themselves a team and need all hands on deck when trying to make sure VSU is a campus for the students, she said.

Comptroller Matthew Rowe also gave updated information regarding the Blazer Allocation Fund. The link for the application is now complete, and there will be two sent out in an email to the students. The link can also be found on the SGA website and Dr. Vincent Miller’s page in the coming week.

In addition to new updates from SGA, Campus Recreational Director Shawn Phippen had some updates of his own.

“The (basketball) court renovations are a little behind schedule; however, we are expecting to complete renovations in the middle of October,” Phippen said.

Campus Recreation will also require intramural sports participants to show identification to get in to the fields, he said.

There will also be a survey sent out to students to decide what to do with the sun deck on the right side of the Rec Center. Many students in the galley of the meeting suggested an outdoor pool.

At the conclusion of the meeting, gallery attendee John Jordan voiced a student concern about SGA not being as active on campus as they should be.

Mapp explained there will be events SGA will host, so the campus will be familiar with the new and old senators as well as the executive team.

“We’re going to make sure that we are out there more, but we are trying to get past our senator retreat,” Mapp said. “There’s no point in going out to speak to students if senators who just got elected don’t know their foundation or role and place in SGA.”

Right now, SGA has an immediate focus on getting new senators acclimated and ready to start working in the student chambers and committees. After the SGA retreat, which only lasts two days, every member will be ready to handle all business, she said.