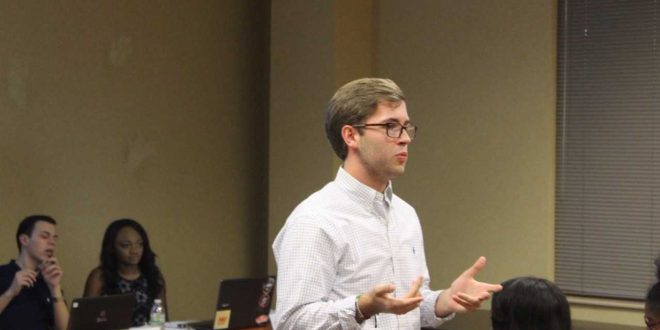 Speaker of the House Jacob Bell addresses the senate

SGA is going straight to the students. On Oct. 16 and 19, SGA plans to host an energizer booth on the pedestrian mall that will focus on students’ concerns.

SGA is looking for new and innovative ways to interact with the student body in an effort to create a close relationship. A majority of the senate voted in favor of the booth.

Later in the meeting, Vice President Aisha Johnson spoke to the senate about an invitation extended by the NAACP to participate in their “Battle of the Orgs” event on Oct. 24. According to Johnson, the event will resemble a field day, where different organizations on campus will compete for a cash prize.

The senate had an overall positive reaction to the invitation, and held a vote in favor of it. Several senators said it would be a great way to interact with organizational leaders and get SGA’s name out there.

Sen. Joy Ihedioha raised a discussion on an incident earlier this semester involving a group of students who chose to name their intramural tennis team, “Make America Great Again.”

Ihedioha said she received concerns from employees at the student rec center about certain teams not complying with the code of conduct for intramural sports. She suggested the senate create a physical code of conduct or waiver for students and for the recreation center.

The senators wavered on the suggestion. Some senators wanted to address the issue, while others wanted to gather the facts before possibly infringing upon students First Amendment rights. President Maya Mapp reminded the senate how important it is to remain objective.

“Just because students disagree or have an opinion about it, SGA cannot choose a side because we are representatives of all students, even those students,” Mapp said.