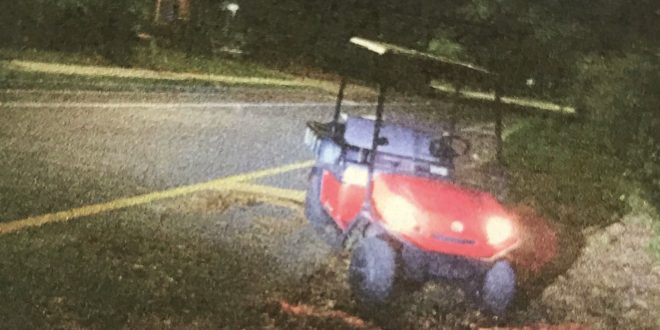 Two VSU football players were arrested in connection with the theft of two IT golf carts on Oct. 5.

Nineteen-year-old freshman Torey Jenkins was arrested on the scene by Officer Rebecca Leatherberry. The second offender ran from the scene.

Eighteen-year-old freshman Jaalen Ford was later arrested under warrant in the lobby of Patterson Hall.

Jenkins and Ford were seen traveling northbound on Oak Street. Jenkins was identified as wearing a red ski mask and was pulled over on Moore Street.

According to the police report, Leatherberry asked Jenkins why he and his friend were driving recklessly on city streets and Jenkins said, “We were just having fun.”

Per the report, the students found the golf carts by Pound Hall, noticed they were left on and decided to take them for a ride.

Jenkins was transported to the Lowndes County Jail where he was charged with felony theft by taking.

After his arrest in Patterson Hall, Ford was transported to the police department by Officer Jeffery Eltzroth and placed in to an interview room. Sgt. Michael Browning interviewed Ford. He was then transported to the Lowndes County Jail without incident.

Ford was charged with theft by taking and obstruction of a police officer.

UPD dispatch notified the IT department to verify that the golf carts were IT’s. Sterlin Sanders, the IT Director, arrived on scene and identified the golf carts as those belonging to the IT Department.

The golf carts did not sustain any damage.

After their arrest, Jenkins and Ford will not be able to participate in the upcoming football game, or any VSU football activities.

“The individuals have been suspended from the football program until further notice,” Herb Reinhard, director of athletics, said.

When asked for comment, Ford declined. The Spectator has not been able to get in touch with Jenkins.