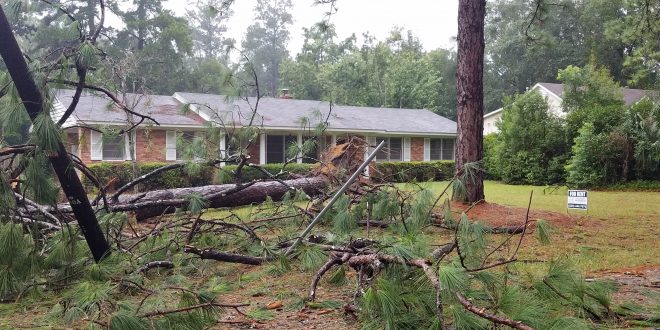 Hurricane Irma is long gone, but the mess she left in her wake seems here to stay. Students of VSU and residents of Valdosta are still recovering from the effects of the storm. While there have been efforts made to assist those who were hit harder than others, some might say these efforts just aren’t enough.

The Mercer University School of Medicine published a series entitled, “Natural Disasters Result in many Health Consequences.” According to this series, there a number of different health hazards that can result from natural disasters such as Hurricane Irma. One of which is food spoiling. Power loss caused by natural disasters lead to food spoiling which also leads to sickness. The monetary loss is something else that should be considered.

“Most of my family is not on public assistance, so when the power went it out, it hit their pockets hard,” Colon said.

Colon also said schools were canceled for two weeks due to the storm.

“That hit a lot of parents because many of them had to take off work to watch their kids,” Colon said.

The series also mentions water pollution as being another outcome of natural disasters. Polluted water can enter your home and cause a great deal of harm if gone unchecked.

Sophomore business administration major, Shy’dasha Speight, said she experienced air pollution rather than water pollution due to mold growing in their air vents at her home in Florida. She also said it has been especially hard for Floridians to get back on track because the Federal Emergence Management Agency (FEMA) has not made good on their promise of reimbursing the victims of the storm.

Speight said while she knows that FEMA has distributed money to some people, it wasn’t enough to cover the costs of everyone’s damages and ultimately thinks that FEMA isn’t keeping their word.

“The hurricane was scary enough hearing about it and even though I didn’t lose everything and the damages could’ve been worse, I feel like this hurricane still had a major impact on my family,” Speight said.

Speight said FEMA should have allowed residents to assess their own damages before dispatching employees to inspect homes, so everyone could get what they needed to start over.

“FEMA can have more of a serious price range of how much everything will cost and have the inspector take pictures of the damages, so they can be more aware of what’s going on,” Speight said.

Previous President Carvajal visits SGA, discusses plans to improve VSU
Next People Poll: What are you going to be for Halloween?

COVID-19 and its effect on mental health

The 2020 presidential election is quickly approaching. In November many students will vote for the ...