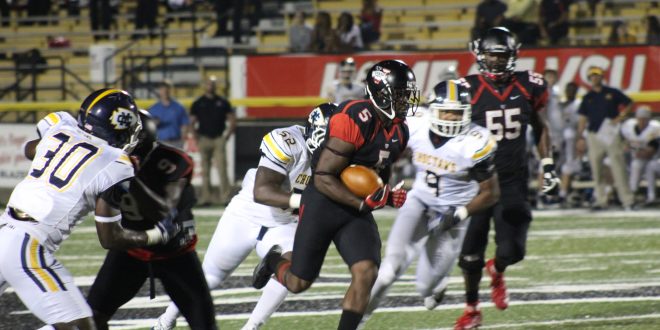 VSU Football is riding a their longest winning streak of the season. They'll need to keep it active if they hope to make the playoffs this season.

A two-game winning streak and a potential playoff seat is at risk when the Blazers host Florida Tech this weekend.

VSU took the top off against the No.19 Delta State in a 34-13 win, and put the Blazers to 3-3 on the season, knocking the Statesmen out the national rankings.

The Blazers didn’t make it much of a contest. They were up early with a 21-point lead heading into halftime.

Their scoring came early and often behind freshman quarterback Rogan Wells. Wells threw for a season high 233 yards, and was the rushing workhorse with 20 carries and a touchdown.

The Black Swarm defense set the tone with a 95-yard fumble recovery for the first score of the game. The Swarm suffocated Delta State by only allowing 3.6 yards per play and forcing three interceptions.

The Statesmen could only manage to score two field goals through the first three quarters, and scored their only touchdown in the final quarter.

Punter Gavin Wilson played a big part in the win, pinning Delta State inside their own 20-yardline three times out of his six punts, earning him Special Teams Player of the Week honors in the Gulf South Conference.

Now at 3-2 in the Gulf South, the Blazers are making their push to finish in the top tier of the conference.

This weekend, they have their sights set on Florida Tech, who is currently ahead of the Blazers in the GSC with a 3-2 conference record.

The Panthers are 5-3 on the season and are coming off an upset victory against No. 18 West Alabama.

Florida Tech’s success stems from running back Antwuan Haynes, the best rusher in the Gulf South with 873 yards on the season, averages slightly over 100 yards per game. Their effective run game has also allowed their passing attack to prosper against their opponents.

Quarterback Mark Cato has thrown for over 300 yards in his last two games for the Panthers. His performances have rewarded him back to back GSC Offensive Player of the Week honors.

With a quarterback averaging almost 200 yards through the air and a 100-yard rusher, limiting one of those weapons in the Panthers balanced attack will be the focus for the Blazers.

“They’re pretty balanced; they’ve got a great running back and a veteran quarterback, those are tough ones to stop,” head coach Kerwin Bell said. “But if you make them go the long way, and don’t give them the explosive plays, and make them earn their way down the field, a lot of times on defense, we’ll have chances to make plays.”

Keeping the ball out the hands of Haynes and forcing Florida Tech to be one dimensional will be the test for the Blazers this weekend.

In two of Florida Tech’s three losses, Haynes was limited to less than 60 yards rushing. Cato still performed with big passing numbers, but the Panthers couldn’t close the deal without the big impact from Haynes.

Haynes tends to have big games when getting around 20 or more carries, so the Blazers will look to force the Panthers to throw the ball and see what Cato can do in the pocket.

Cato has thrown for 10 touchdowns but has also thrown seven interceptions. The secondary of the Black Swarm, lead by ballhawks Brandon Roe and Steve Derosier, will be sure to see chances for force turnovers.

The game will be hosted by the Blazers Saturday, at 7 p.m. at Bazemore-Hyder Stadium.