Home / Opinions / Students say homecoming court is based on popularity

Students say homecoming court is based on popularity

Each year, current students and alumni look forward to homecoming week. The fun filled experience, happening between Oct. 30 to Nov. 4, includes events such as Casino Night, Masquerade Mystery Mission, Glow in the Dark Pep Rally and of course, the homecoming football game.

Aside from the events, some of our fellow Blazers have taken on the task of running for homecoming king and queen. These are students that campus organizations choose to endorse and feel would represent the campus the best.

In a Twitter poll on Oct. 24, 106 VSU students debated if homecoming votes were based on popularity or qualifications. 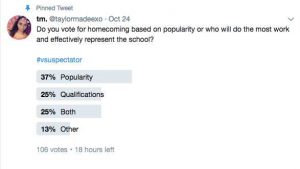 One of those students, junior Rasheem Callender, spoke his opinion on how students vote for homecoming.

“Homecoming is a huge popularity contest,” Callender said. “Honestly, I have not seen or heard of anyone who won the title and actually made a difference.”

Homecoming has always been about who people know rather than who can actively represent and be the voice students need. Whoever wins homecoming king and queen should be a person of integrity. They have to  listen and participate, while also representing the entire student body.

In the Twitter poll, 37 percent of the 100 votes agreed popularity was the main influence for how students vote.

VSU students almost unanimously agreed that if someone more qualified but lesser known was to run for homecoming court over someone well known on campus, the student that everyone knew would win.

Though running for homecoming may be a friendly competition, it is easy for students to be swayed to vote for someone just because of what they give out or how many posters they see.

“I think it’s a great group of people who all have made an impact at VSU,” Jones said. “Each person has worked hard to maintain a good standing in the race to become king or queen, but I’ve already decided who I’m voting for.”

The race for VSU’s Homecoming king and queen is definitely in full effect, and once chosen, the winners have to put their leadership skills in full effect.

Previous VSU discusses changes to academic appeal process
Next Voice of the Students– “What’s the most cliche Halloween costume?”

Mental health does not get enough light shined on it. Social media influencers post a ...