Home / Sports / Homecoming not ‘just another game’ for Blazers 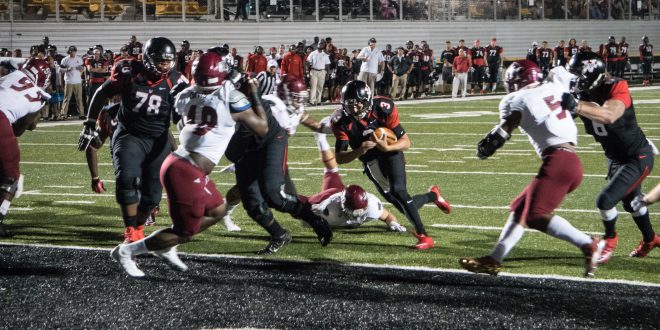 Rogan Wells had a six touchdown outing against Florida Tech. He may need to duplicate that effort to beat conference leading West Alabama.

Homecoming not ‘just another game’ for Blazers

Valdosta State seems to have found their groove after handing Florida Tech a 42-14 loss last Saturday, extending their win streak to three games. Now, they’ll have to face conference leading West Alabama with their playoff fate on the line.

Blazers quarterback Rogan Wells had himself a night and absolutely torched the Florida Tech defense with six total touchdowns, rushing for four of them.

The freshman quarterback looked like a one-man band completing on 16 of his 27 throws for 238 yards, and for 76 rushing yards. Wells performance earned him Offensive Player of the Week and Freshman Player of the Week honors for the Gulf South Conference.

The Blazers’ defense played like magicians and made the leading rusher in the Gulf South conference disappear Saturday night. Panthers running back Antwuan Haynes was limited to only 59 yards on 18 rushes, averaging just 3.3 yards per carry.

Special teams earned their share of glory as well and played a big part in field position. Punter Gavin Wilson pinned Florida Tech inside their own 20 three times. Wilson has now received back to back Special Teams Player of the Week honors.

After a disappointing start,he Blazers have made an incredible rebound this season and only have two conference games left to play.

After beating Florida Tech, Valdosta State improved to 4-3 on the season and 4-2 in GSC play.

The Blazers are now tied for second place in the GSC with West Georgia and North Alabama.

Their next game is perhaps the biggest game of the season for the Blazers. They will be playing the No. 1 team in the conference West Alabama.

West Alabama is 7-2 on the season and 6-1 in the conference and just jumped to the No. 22 spot in the national rankings.

But West Alabama must come to Valdosta for the Blazers homecoming and prove that they’re the best team in the conference.

The Blazers look like a different team compared to the beginning of the season, and Wells continues to impress as the Blazers near the end of their season.

“Some coaches will say it’s just another game, but it’s not just another game. This is a big game,” Head coach Kerwin Bell said. “To me you want to know it’s the biggest game and our guys know that. That’s how we’re approaching this game.”

Expect the freshman quarterback to lead the Blazers offense in a shootout against West Alabama.

West Alabama is the highest scoring offense in the GSC averages 40 points per game and loves to throw the ball.

Tigers quarterback Harry Satterwhite has completed 79 more passes than the second-best quarterback in the GSC.

Satterwhite’s favorite target, wideout Donta Armstrong, is alos a threat and leads the GSC in receptions and receiving yards.

The Tigers have connected on 20 touchdowns and average close to 280 yards per game through the air this season.

This matchup will probably be the toughest one VSU’s Black Swarm defense has seen all season. But that doesn’t mean the Black Swarm will fold easily.

The Black Swarm is anchored by the leading tackler in the GSC, Malik Slater who has 8.4 tackles per game. Defensive backs Brandon Roe and Steve Derosier could have a huge impact on the game as the top ballhawks in the Swarm’s secondary.

“Our defense is really at its best when teams have to throw the football,” coach Bell said. “They have some really skilled receivers, but the good thing on our end is that one of our strengths is our secondary. So it’s going to be a big challenge between them.”

For the Blazers, winning the line of scrimmage will be another key to success, as West Alabama has sacked opposing quarterbacks 25 times this season, and has only allowed 10 sacks on offense.

This matchup holds the weight of VSU’s chance of winning the GSC as well as their chance at a playoff berth.

VSU’s highly anticipated homecoming matchup will be broadcast on ESPN3.

The contest will kick off Saturday, 3 p.m. at Bazemore-Hyder Stadium. The game will be preceded by a ceremony honoring the VSU Football seniors.