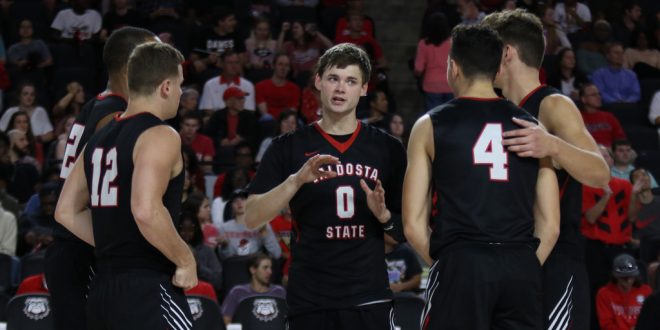 VSU Men's Basketball lost their preseason exhibition game against the University of Georgia on Thursday. They open their official season on Nov. 11 in the SIAC and GSC crossover event in Pensacola, Florida.

The VSU Men’s Basketball team got their first taste of the 2017-2018 season during a preseason exhibition matchup Thursday night against the Georgia Bulldogs in a 117-74 loss.

Defense was certainly a major entity of the contest that was held at Stegeman Coliseum in Athens, Georgia. The first score of the game came after two minutes of play when Co-SEC Preseason Player of the Year Yante Maten grabbed an offensive rebound and scored it.

A few minutes later, VSU Senior Labrian Shiflet drilled a three pointer to put the Blazers on the board. It was the only basket for either team until UGA’s William Jackson hit a long-ranged three pointer at the 15:20 mark.

The Bulldogs amped up their attack after five minutes of play, but the Blazers managed to keep the game tight when senior Jimmy Kodet connected on a three pointer that started a 10-4 run between the 8:00 and 5:00 mark.

The Blazers run pulled them within six points at 28-34. Georgia then capitalized on it with 12 unanswered points towards the end of the first half of play.

With a 13-2 run in the beginning minutes of the second half, the chances of VSU coming back were very slim. The Bulldogs offensive arsenal was put on full display as they scored 61 points in the second half to the Blazers’ 40.

The contest did not go in the Blazers favor, but VSU showed promise on the both ends of the floor, particularly on offense.

Senior Guard Tyrone Sam led the Blazers with 25 points on 10-of-21 shooting from the field and 2-of-5 from three-point range.

Preseason All-GSC selection Beau Justice added 14 points for the game with 11 of those points coming in the second half alone. Shiflet and Winston Morgan each scored 11 points for the Blazers.

The bench unit scoring efforts for the Blazers were no slouch either, tallying 49 points to just 41 by the Bulldogs.

Maten was the offensive go-to for the Bulldogs, who ended the game with 24 points and 10 rebounds, notching a double-double. Freshman Rayshaun Hammonds, added 17 points and grabbed a game-high 11 rebounds to put the Bulldogs over the top. The Bulldogs had five double-digit scorers in the game.

Leading up to the game, the Blazers knew what needed to happen to keep the game a true competition.

“Whenever you go on the road, you’ve got to keep your composure,” Head Coach Mike Helfer said. “I am a firm believer that you’ve got to rebound the basketball.”

The Blazers will play their first official game of the season on Saturday, Nov. 11 in Pensacola, Florida against the Wildcats of Fort Valley State at 7 p.m.

The game will be held during a game a two-game weekend for the Blazers at the Southern Intercollegiate Athletic Conference and Gulf South Conference Crossover at the University of West Florida.