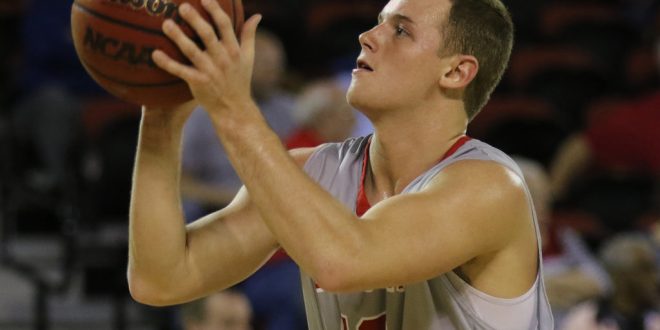 Beau Justice was the only Blazer to be selected to the Men's preseason All-Conference team.

Shooter’s Shoot: Justice making his own name at VSU

On the hardwood, Beau Justice and the hoop have a very special relationship.

Justice, a sharpshooting junior guard for the scorching 2017-2018 Blazers basketball team, shattered nearly every scoring record during his high school career and has continued to perform here at VSU.

Growing up in Peebles, Ohio, a small town 64 miles east of Cincinnati, Justice was deemed the successor to his oldest brother, Blake. Blake finished his high school career with 314 made three-pointers, the second-most in the history of high school basketball in the state of Ohio.

Beau remembers how dominant his brother was as a freshman.

“His first game he had 46 points and that just carried suit for 2,100 points,” Justice said. “He had multiple 40-point games and averaged 27 [points per game].”

Beau’s first year as a freshman varsity player was not the best, but it certainly foreshadowed his future.

According to Maxpreps, a website that covers high school sports, Beau Justice played in 23 games, averaging 10 points per contest as a freshman. He then made a massive improvement over the next three years, putting together 24 points per game as a sophomore, 30 points per game as junior and 34 as a senior.

Justice’s stats were very astronomical, but the team’s success means the most to him.

“We won our first district championship my junior and senior year since 1984, winning back to back,” Justice said. Leading up to capturing the championship, Justice scored 40 points in a district tournament win.

In the championship game, he went 28-for-32 from the foul line and notched 39 points.

Justice holds many records at Peebles High School. He set the single-game scoring record (51) and the most points scored in a single-season (839). Justice was also a finalist for the Ohio “Mr. Basketball” award.

After a stellar high school career, Justice committed to play for the West Liberty Hilltoppers in West Virginia.

“I think I did that just because I wanted to have space away from Blake,” Justice said of his brother Blake, who had left Ohio to come to Valdosta and play for the Blazers. “I wanted to create my own path a little bit, and it was closer to home.”

At West Liberty, Justice played in 31 games and averaged six points per game for the season. Though he didn’t play a bunch of minutes, Justice still had respectable statistics. He shot 57.3 percent from the field and close to 76 percent from the foul line.

The Hilltoppers finished the season with a 31-4 record, but lost in the final four. Justice then had to make a decision for his future.

“I had a great experience there, as far as winning, but I never felt like it was home to me,” Justice said.

Justice decided to head south to Valdosta and joined the VSU Blazers, where Blake is currently an assistant coach.

Beau had a great sophomore season, starting all 32 games for the Blazers and averaging nearly 34 minutes per contest. His sharpshooting ability did not waver when he averaged 14.3 points per game and drilled 87 three-pointers for the season.

Compared to his opponents, Justice ranked No. 4 in the Gulf South Conference in three-point field goal percentage with 40 percent.

Fans salivate on the scoring ability of Beau, but his teammates gravitate towards his ability to lead.

“Beau is a great leader,” Jimmy Kodet, the Blazers junior forward, said. “He’s out here all the time working really hard. He knows how to get on to everybody and to make sure we are playing to the best of our ability.”

Although shooting has been a huge identity for Justice, Men’s Head Coach Mike Helfer taught him another dimension of being a true basketball player.

“Pretty much just how to win and what it takes to win,” Justice said.

And certainly, Justice is dedicated to bringing a championship to VSU.