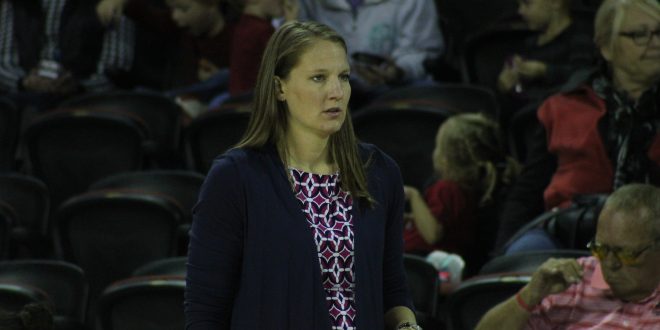 Lady Blazers Basketball enter Saturday's contest against West Florida with a 4-1 record. They are coming off of consecutive wins at the Western Washington Lynda Goodrich Classic last weekend.

The No. 23 ranked Lady Blazers basketball squad is prepared for their first major test of the 2017-2018 season, as they will travel to Pensacola, Florida to take on the West Florida Argonauts in a rematch of the 2017 Gulf South Conference championship game last year.

The Lady Blazers came away with a 91-79 win over the Argonauts. Senior Madi Mitchell scored a game-high 28 points in the contest. Also, senior forward Kenya Samone’ Dixon pulled in a game-high 12 rebounds.

Going into Saturday’s matchup, the Lady Blazers hold a 4-1 record and are trying to continue their momentum after defeating Western Washington and Saint Martin’s University in the Western Washington Lynda Goodrich Classic last weekend.

The Lady Blazers won against the Vikings in a close 59-56 Friday victory and proceeded to defeat Saint Martin 89-73. The MVP honors was given to Mitchell for her stellar showing for the weekend.

Fast forward to this Saturday, the Lady Blazers will get their first taste of the Argonauts who can seemingly match the offensive ability of VSU. So far, West Florida ranks third in the GSC in scoring with an average of 78.2 points per game.

VSU Women’s Head Coach Carley Kuhns understands how imperative it is to neutralize the Argonauts on the glass and in the paint.

“They’re a really good dribble-drive team,” Kuhns said. “Rebounding is going to be key for us and having a really good defensive effort, being ready to guard their dribble penetration.”

Mitchell also wants to emphasize the paint-protection this week.

“They need offensive rebounds,” Mitchell said. “That’s basically just like heart. You’ve got to box them out and get it and go.”

West Florida is currently riding a two-game winning streak, just like the Lady Blazers. Furthermore, the Argonauts have been in the comfort of their own arena for their past two games, with the upcoming matchup against VSU marking their third straight.

The Lady Blazers have watched the Argonauts once before this season in the GSC/SAIC Regional Challenge held at The Complex.  The Argonauts are led by junior Halee Niemann, who tallied 24 points against the Rams of Albany State.

Niemann is currently eigth in the GSC in scoring averaging 15.3 points per contest.

Individually, Samone’ Dixon’s 10.4 rebounding average per game places her No. 2 in the conference. The only other player who stands above statistically her is West Florida senior forward Courtney Meyer, who averages 12.5 rebounds per game.

Samone’ Dixon plans to leave everything on the hardwood this Saturday.

“I just let the game come as it comes and control what I can control,” Samone’ Dixon said. “I can control my effort and rebounding is all about effort.”

Though it’s early in the season, the showdown will be greatly anticipated.

“It’s pretty crazy that we’re facing one of our biggest conference rivals just six games into the season,” said Kuhns to VSU Athletics. “Both of us started the season nationally ranked, and this weekend’s game will give us both an idea of where we are at and where we need to improve.”

Familiarity will play an enormous role in this contest, as both teams understand each other’s strengths and weaknesses.

“We pretty much know everything about them, but they’re going to be really aggressive and do all the little stuff to win.” Mitchell said about the upcoming game against West Florida. “We know a key for them is driving and getting to the rim.

Saturday’s tip-off will be held at the West Florida Fieldhouse at 3 p.m. EST.

Previous No. 15 Blazers open conference play against UWF
Next Wishing Wells: VSU quarterback of the future