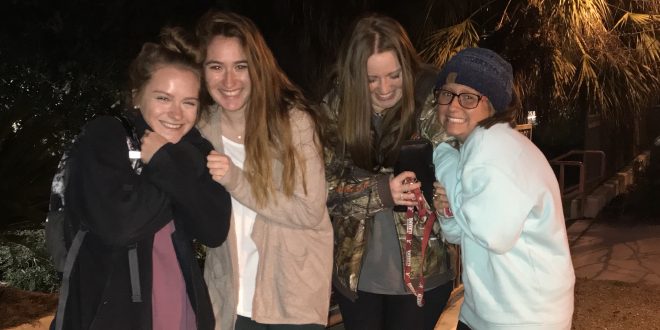 VSU students were left shivering and shocked Wednesday night as temperatures dropped into the 20s, causing the National Weather Service to issue a hard freeze warning for Lowndes County.

The VSU Athletic Department reacted by delaying upcoming basketball games which were scheduled for Thursday and Saturday due to dangerous driving conditions for traveling teams. All games were moved back one day.

Students scrambled to don their beanies and their heavy coats as the temperature plummeted, but unfortunately, some students did not have any cold weather precautions prepared.

“It was definitely shocking because I’m from Florida,” Pait said. “ I didn’t bring enough pants.”

Although students were taken off guard by the extreme fluctuation, the cold will not last for long. The lowest temperatures were expected early Thursday morning with the thermometer climbing back into the 60s by the weekend.

However, for students headed home to Atlanta and other northern cities such as Macon, Georgia, there is more of a cause for concern with the snow and icy roads.

The wind chill advisory has been extended to 10 a.m. on Thursday, and reporters are concerned about more black ice and the roads continuing to refreeze in Atlanta, according to Fox News.

A state of emergency has been declared for 83 counties all over north and central Georgia, schools and businesses are shutting down and hundreds of accidents have been reported, according to AJC.

Back in Valdosta, a group of freshman women racing from the Student Union to their cars showed varying degrees of preparedness. Some were dressed in beanies and duck boots, while others were caught unaware with just a light jacket and sandals.

One of the students said she is actually enjoying the change of pace.

“It’s fun to not have to dress in just t-shirts and shorts for once,” Reilly Griggs, a freshman criminal justice major, said.

Whereas her friend was not as jolly and sarcastically blamed nature for her cold state.

Another Floridian who’s not used to the cold weather weighed in on the surprise temperatures in a more positive manner.

“I love it because I’m from South Florida, and it never gets cold like this,” Natalie Hogwood, a freshman undecided major, said.

Even students from Georgia are not quite used to this level of cold.

“I’m from Atlanta,” McKenzie White, a freshman international business major, said. “But I’m not made for this.”

Previous Editorial: Protect yourself from the flu
Next Blazers represent in annual Tropical Bowl