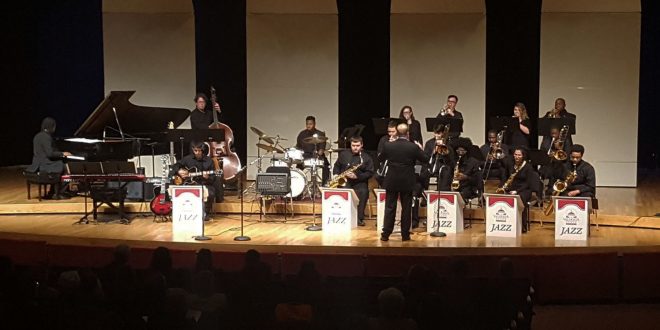 Last night, Mardi Gras made a quick pit stop at the Valdosta State Fine Arts Building on the way to Louisiana.

There were two high schools involved, Lee County High School and Valdosta High School. Two VSU bands performed, the jazz band and the new jazz ensemble.The four ensembles did an amazing job performing some foot tapping and finger snapping songs that came in a variety of tempos and sounds.

The high schools had a few solos that were marvelous. Everyone was clapping with enthusiasm after the saxophone solos. They were probably the best part of the concert.

Hill was a tuba player in the music program at VSU. Jazz studies director David Springfield said Hill was always asking to play tuba with the jazz ensemble.

It was refreshing to see a former student come full circle and teach something they love to young musicians.

One of the songs played at the event was a Duke Ellington song called “It Don’t Mean a Thing”. I really liked that song. It was very energetic, and made me want to swing dance, if I could.

The concert consisted of 14 total songs. Each band played two to four songs each and then all of the bands came together for one last song.

“The crowd really seemed to receive the students’ performance very well,” said Springfield. “Everyone seemed to really enjoy the music.”

The music department holds several concerts during the fall and spring season.

“We also try to put this show on as an outreach to our community,” said Springfield. “The Department of Music wants to serve as a cultural center for South Georgia and provide the community with artistic experiences of lasting value.”

All-in-all it was a great experience at the Fine Arts building.