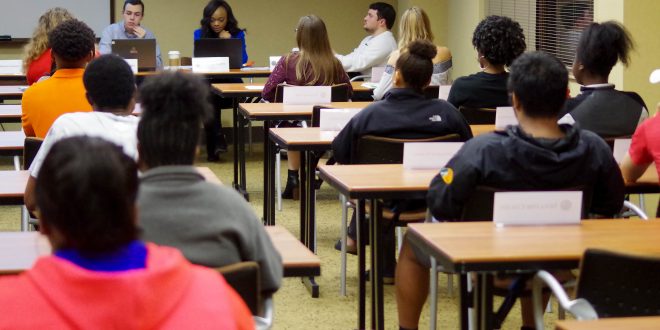 SGA's Monday meeting addressed the financial aid issue among others.

On Monday, Feb. 12, SGA started its weekly meeting off with a review of the Tiered Parking Model Proposal for the upcoming year. VSU Parking and Transportation Director Jill Ferrell and Auxiliary Services Director Shannon McGee explained the proposal to the gallery.

Over the past few months, SGA, as a whole, worked with auxiliary services on editing the proposal to ensure the model best serves students before presenting it to the student body.

SGA then opened the floor to the senate and gallery members for those with questions about commuters and off-campus students. From the many responses in the room, a recurring concern was if students would get parking on a first-come-first-serve basis or by classification. Sen. Bob Greenbaum said that SGA wanted to take into consideration how commuters feel.

As the meeting progressed, there were no updates from President Maya Mapp because she was out on university business. Vice President Aisha Johnson had updates and reviews of the Waka Flocka concert on Feb 9.

“Thank you for all of those who participated and helped promote the concert,” Johnson said. “The concert had an excellent turnout.”

Johnson also spoke on the End It Movement which raises awareness about human trafficking. VSU will be hosting the event next week on Feb. 22.

Secretary Sylandi Brown then reviewed the energizer booth analytics and also discussed what would take place and how they would run.

“Our energizer booths are one of our primary avenues to actively receive student body feedback and determine where we need to focus our efforts at the present time,” Brown said. “They are held every first Tuesday and every third Monday of the month in front of Odum Library from 11 a.m. to 2 p.m.”

The energizer booths are normally set-up somewhere on-campus, manned by SGA representatives. The representatives have student passersby fill out surveys and questionnaires.

Generally, the areas with the most amount of concerns are parking and transportation, dining and housing. Those topics alone held a total of 103 student concerns.

“To gather more data specific to the issue, the campus affairs chamber created this survey to obtain a better understanding of how students felt that their on-campus living experience could be improved,” Brown said.

The data will be used to shape the discussion in town hall meetings that SGA will facilitate in residence halls in the upcoming weeks.

Any additional updates from SGA will be addressed at the next meeting on Monday, Feb. 19 in the Student Union.