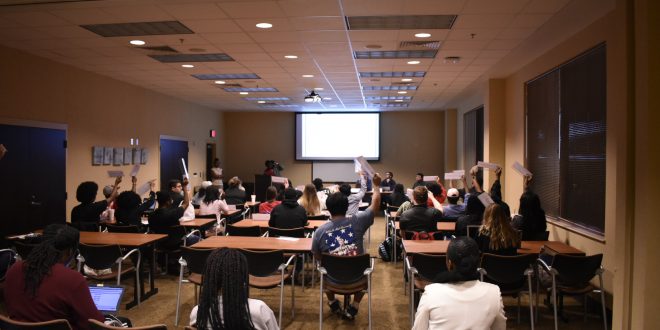 With only a few days until spring break, SGA held nothing back on Monday’s meeting as they moved forward in making VSU a better place for students.

The meeting started off with Director of Campus Recreation, Shawn Phippen, who asked SGA a question: What would students do with an extra $30?

Phippen informed SGA that the bond representing VSU’s debt for the rec center is expiring at the end of the 2019 school year. The $30 fee students pay in their tuition was used to pay off this bond.

“This semester I’m going to have to get data on what students want to do with $30 after we pay back on our building,” Phippen said.

He wants SGA’s help in gathering at least 2,400 students for a survey collecting this data. Once finished, it will be turned over to VSU’s fee committee.

“We’re not done with the survey,” Phippen said. “The first question is going to be something like ‘Do you want campus recreation to keep the $30,’” Phippen said.

If Campus Rec keeps the money, they will be able to use it to increase operating hours, upgrade the sundeck space to a workout area and replace equipment.

“We have treadmills in our building right now that are 17 years old,” Phippen said. “The life expectancy of a treadmill is five.”

The survey will have two other choices that include a termination of the fee or a write-in answer.

Phippen said he knows the risk of adding termination as an answer choice but hopes students will vote to repurpose the fee.

All available SGA members unanimously voted in support of the survey.

Comptroller Matthew Rowe announced that next year’s SGA total budget will increase by almost $8,000. All SGA executive board members will receive a pay increase of $9 an hour but will have an increase of hours needed worked per week.

Conference and competition travel costs decreased by $500, and programming costs increased by $1,800.

Rowe said these changes were made to increase retention and outreach while taking away money from areas where the money wasn’t necessary.

Williams said she wants to bring more events on campus to include graduate students without excluding undergraduates. She then proposed the “Karaoke Corral,” a lip sync battle event.

The event calls for students to use either canned goods or a monetary donation to participate and includes trophies for the top three winners. No date is currently set, but Williams proposed it to be on April 20.

All but two SGA members voted to support the event, while the others abstained.

Before ending the meeting, President Maya Mapp announced the opening of the election packets. For anyone wanting to apply to be a senator or on the executive board will need to have their physical and online packets in by March 23.

“We just want to make sure that there’s a good, open and positive commissioning period,” Mapp said. “That’s something that we lacked, and that’s why we got in trouble our first year.”

SGA will hold their next meeting the Monday after spring break.