Home / Campus Life / Get to know LASA at VSU 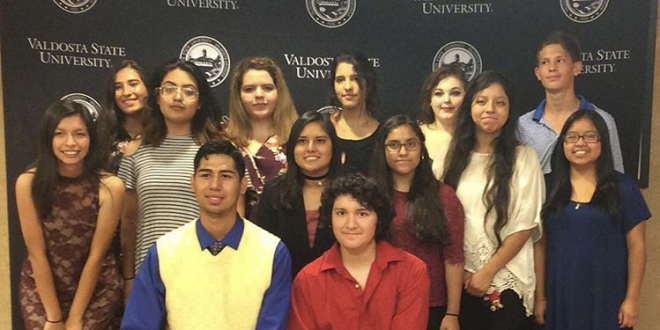 Members of the Latin American Student Association at VSU.

Get to know LASA at VSU

VSU houses countless clubs and organizations. This is great because there is a place for everyone, but some just slip through the cracks. It can be a bit overwhelming at times to decide. Here at The Spectator want to highlight those that students may not be aware of.

One group, in particular, is the Latin American Student Association (LASA). LASA was established in 2001 at VSU and functions as a student organization under the Office of Student Life.  This organization provides opportunities for members to embrace and share their Latin heritage. They also foster an atmosphere of cultural awareness for non-Latinos who embrace the Latino culture.  Membership is open to all students.

For the president of the club, Andres Contreras, forming this organization was essential. “A couple of friends and I noticed that we don’t see many Latinos on campus,” Contreras said. “We see them, but then we go weeks before we see them again. It feels unwelcoming like we are missing something.”

Contreras said that after noticing the lack of Latinos, some faculty members approached him about forming an organization for the Latino community on campus.

“We started doing the work to make a new organization and were told that we could simply revive LASA and start over using the name,” Contreras said. “LASA was a fit, and we are here today moving forward as the Latin American Students Association.”

One of his first memories of LASA was during the planning stage when all the founding members came together for a night of bowling.

“It was great to get to know each other and see what our goal as a group was,” Contreras said.

He believes LASA formed a lasting impression with other Latinos on campus who are just looking for a connection to their heritage.

“A sense of welcoming has formed, and everyone supports each other,” Contreras said. “Along with being able to freely show our pride, we embrace everyone no matter how mixed our culture gets.”

Vice president of the club, Yanet Garcia, said this club has helped her stay in connection with those just like her.

“It just seemed like the Latino community was in hiding,” Garcia said. “We wanted everyone to feel welcomed here at VSU. LASA is a group of students that want to make a difference within the university and the community by introducing our cultures with those who wish to learn about them.”

Garcia encourages everyone to join.

“LASA has brought many different people together and has given us the opportunity to make lifelong friends,” she said.

If you’re thinking of joining an organization on campus and this seems like the right fit for you, check it out for yourself. Their next meeting is March 20 in the Bailey Science Center Room 2022.