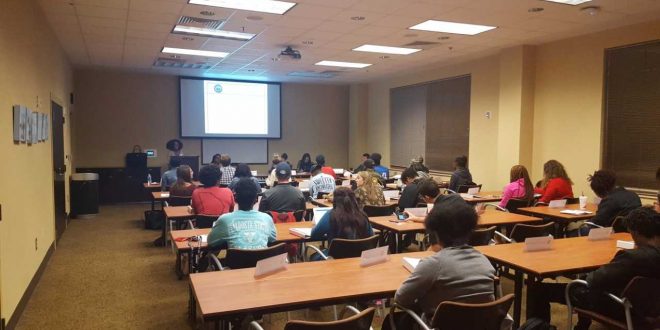 SGA senators listen and take notes while at their weekly meeting.

It was business as usual at SGA’s weekly meeting on April 2. The organization discussed a few topics on a short agenda in preparation for election debates next week.

President Maya Mapp opened the meeting with a greeting to the audience. Vice President Aisha Johnson then presented an update on the Blazer Trail Color Dash saying funds were due last night from the Senate. The Senate was also encouraged to turn in applications immediately if members are planning to participate in the event.

Comptroller Matthew Rowe then presented his report which imposed a unanimous Blazer Allocation Fund approval. A student requested $150 to travel abroad in London and the Senate voted in favor of the motion.

In the process, Student Affairs is asking SGA for a short list of students to take a survey and respond on how the university can improve administratively such as students’ experiences with financial aid, housing, transportation, etc.

Also, SGA was asked to make recommendations and comments on two important areas, the first being the process of homecoming king and queen court. Miller asked SGA to give feedback and inputs on what that process could potentially be if changes are made.

The second involved conversations about the Student Union. SGA explored ideas on what kinds of updates they’d like to see such as retail food, more meeting rooms and a tanning bed.

With all the topics addressed, SGA senators took the time to announce upcoming events on campus.

Sen. Arlandis Lundy announced that Alpha Phi Alpha Fraternity are hosting a fundraiser on April 14. He asked for members of the Senate to participate.

Lastly, SGA voted in favor of cancelling next week’s meeting on Monday, April 9 due to the debates. The next meeting will occur the following Monday, April 16.