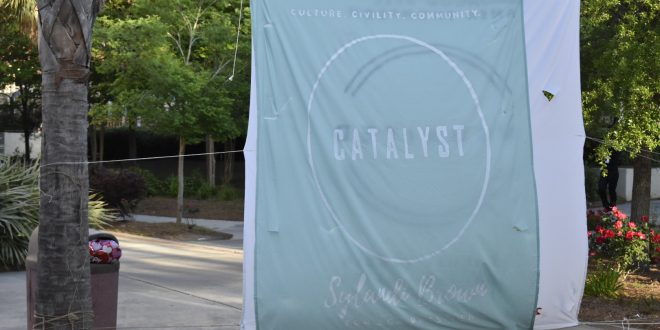 Current SGA Secretary Sylandi Brown is running by herself under the campaign name "Catalyst."

Get to know the SGA presidential candidate: Sylandi Brown

Sylandi Brown is a sophomore speech communication major from Hawkinsville, Georgia who has always had a passion for being involved and being a beacon to assist others.

With the love and devotion she shows for her organizations, Brown knows that she will give her all to the campus, student body and community.

When looking into college, Brown was set on VSU early on in her high school career.

“Attending VSU was a decision I made early on, and when I got here, I realized the various changes and improvements that needed to be made,” Brown said. “From that moment on, I decided to join SGA.”

A year into being SGA secretary, Brown believes she knows what steps are necessary to take in order to run SGA smoothly and be what a student body needs for a president.

With her platform, Catalyst, Brown feels that the love and commitment she has for students is a key factor to have when running for anything and being a part of an organization.

“I decided to run for SGA president when I saw President Maya Mapp at Convocation.” Brown said. “I saw her be such a positive light for campus and the student body, and from then on, that had a big impact on why I joined SGA and what I hope to do for students.”

Contrary to the stereotype of being an only child, Brown understands the importance of putting others first and the impact you can have if given the chance. Originally on the same ticket as friend and SGA Sen., Jacob Bell, Brown decided running by herself would be a push for not only herself but preparing for the pressures of being SGA president if she was to win.

“I knew running solo would be a huge risk; however, I know what I am capable of,” Brown said.

Brown says she is all about creating and promoting culture for VSU’s campus. For her, a lot of issues on campus need to focus on how to authentically gauge the present culture of campus and how we can spark growth.

“With the platform of Catalyst, we have to allow ourselves to be that change for culture, civility and the community,” Brown said. “I have a Blazers helping Blazer mindset and we have to have love, respect and understanding for one another in order for us to move forward as a whole.”

Throughout her entire campaign process, her favorite part has been getting to know various student organizations first hand and being involved with what they would like to change and help grow the campus.

Focused on the student body, Brown says she is willing to talk to, understand and be the voice students need in order to make the campus what it should be.

Previous Get to know the SGA presidential candidate: Jacob Bell
Next What the NCAA tournament taught us about ourselves