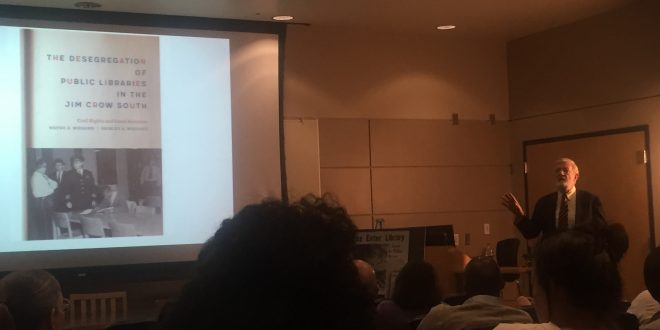 Wayne Wiegand speaks to the audience about how Libraries in the South treated the Black Community.

Wiegand teaches VSU about Southern libraries in the 1960s

On April 12, Odum Library welcomed a well-known historian who shared stories on what southern libraries were like in the 1960s for black citizens.

Wayne A. Wiegand, an American library historian and author of over 10 books, gave a presentation titled “The Desegregation of Public Libraries in the Jim Crow South.” It is also the title of his newest book. Wiegand addressed several issues, telling stories of how blacks were treated.

One story he told was of the Tugaloo Nine, which were a group of African-American students at Tougaloo College who participated in civil disobedience by staging sit-ins of segregated public institutions in Mississippi in 1961.

During the 1960s, Mississippi was considered by civil rights organizer, Medgar Evers, to be “too racists and violent” for lunch counter sit-ins. In response, public libraries were chosen because they were supported by both black and white taxpayers. Wiegand said that Joseph Jackson Jr., NAACP youth council member, entered the “white” Jackson Public Library on March 27 and staged a “read-in.”

The nine students were members of the National Association of the Advancement of Colored People, formally known as the NAACP.

“NAACP members told all the students to dress well, sit quietly in the library and avoid violence at all costs,” Wiegand said. “The four women wore dresses and the men wore shirt and ties.”

The students were told “there’s a colored library on Mill Street . . . You are welcome there.” According to Wiegand, “When they refused to leave, they were arrested and charged with breach of the peace for failing to leave when ordered to do so.”

Wiegand touched on several other instances of racial discrimination inside of libraries in the south. In the latter part of his presentation, he discussed the functionality of the Audubon Regional library, located in Clinton, Louisiana.

He informed the crowd of this specific library to show a “bigger perspective.” The Audubon Regional Library operated three branches and two bookmobiles.

“Blacks were not allowed to enter any of the branch libraries,” Wiegand said. “The bookmobiles were segregated: a red one served only whites and the blue one served blacks.”

Also, during this portion of the presentation, he displayed a picture of a blue slip of paper that was used by this library. On the slip was the library name, location and the word “negro.” This slip was used by blacks to receive the books they had ordered from the library.

After ending the presentation, he opened the floor for any questions the audience may have. Wiegand was asked by one librarian, “What do you think is the percentage of librarians who resigned or just did not want the job any more during that time?”

“I am a historian,” Wiegand said jokingly. “We create historical narratives based on anecdotes. We can’t go and survey the people we study.”