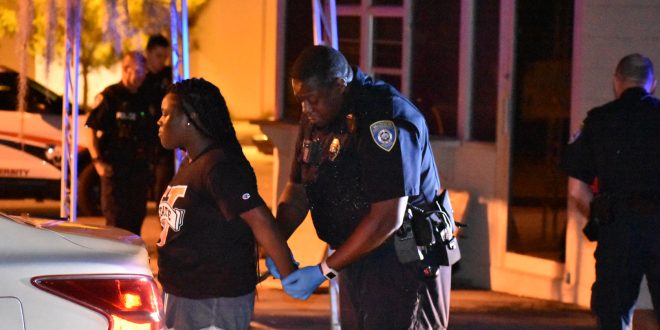 A UPD officer arrests one of the four females involved in the late Sept. 12 arrest.

Four females are facing a possession of marijuana charge after a late night stop went awry.

However, they were not originally stopped for the possession charge.

According to Sgt. Mark Williams, the four were originally pulled over for driving without their headlights on. Once pulled over, Lee smelled something in the car and proceeded to call backup in searching the vehicle.

“(This) resulted in the arrest of four young females due to the possession of marijuana,” Williams said.

The four were charged with the possession of less than 1 oz. of marijuana. At least two of the offenders were VSU students.

Because the case is still under active investigation, no further information was available. This story is subject to updates as they come out.