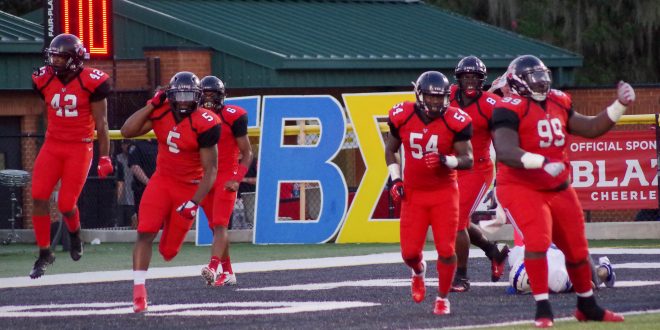 The Blazers will enter this weekends matchup against the Choctaws 4-0, hoping to continue the unprecedented streak.

After a blistering 4-0 start to the season, the VSU Blazers are looking to the west.

Saturday, Sept. 29, the Blazers will embark on their longest road-trip of the season, an eight-hour jaunt to face the Choctaws of Mississippi College in Clinton, Mississippi.

The Choctaws are 2-1 (with one cancelled game), winning their first two games but losing their conference opener to the West Florida Argonauts in week four. They have yet to play a road game, a welcome to Clinton as the versatile Blazers squad have won at home, on the road and at a neutral site.

The Choctaws lean heavily on the run; they’ve posted twice as many yards on the ground as they have through the air (829 to 351). Dual-Threat Quarterback Detric Hawthorn leads the charge with 320 yards on the ground, making him the team’s leading rusher.

Remarkably, the defense is anchored by the signal-caller’s identical twin brother. Derric Hawthorn leads the team’s defense in tackles from the cornerback position. Their defense is an inverse of their offense, giving up 351 yards rushing on the year, but surrendering 863 yards through the air.

Much of the game will be determined by the Blazer’s success in the passing game. Almost half of the passing yards the Choctaws conceded were on Sept. 22 when West Florida Quarterback Sam Vaughan lit them up for over 300 yards and three touchdowns in their only loss of the year.

Though turnovers cost the Choctaws in a game that was closer than the score indicates, the Argonauts’ success throwing the ball could indicate the quickest way to beating the Choctaws is moving the ball through the humid Mississippi air.

The Choctaws will likely lean on their running game as their limited passing ability and pressure from the VSU defensive line will probably make outside runs and scrambles from the pocket a necessity.

Moving the ball on the ground against the vaunted Black Swarm will be the toughest test they’ve faced yet.

Kickoff is at 7 p.m. on Sept. 29 at Robinson-Hale Stadium in Clinton, Mississippi.