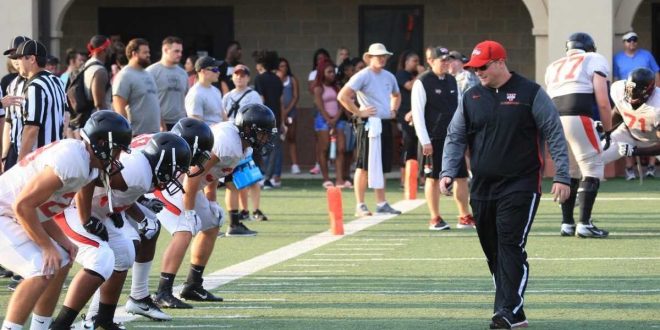 John Peacock is a student assistant coach for VSU Football who has inspired the team with his health battles.

The VSU Blazers football team has seen a multitude of success on the field this season, but on the sidelines, they have to endure a life battle of one of their coaches.

Back in September, Tight End/Full Back Coach John Peacock was diagnosed with cancer. Doctors went to remove the tumor, but they found that it had spread and an aggressive treatment of chemotherapy would be needed.

Coach Peacock has been a student assistant coach at VSU for the past two years and is huge part of the Blazer family.

VSU Sophomore Tight End, Travis Taylor, a transfer from Charleston Southern University, is coached by Peacock and sees him as a much bigger inspiration to the entire team, not just the full backs room.

“Every time we win, it’s a great time,” Taylor said. “We usually come back on Sundays to practice, and everyone’s still having a great time. It’s never really, ‘no one wants to be out here.’ He just comes in sometimes if we’re having a bad day.”

Even though this battle has sidelined him from the task at hand, he has found himself keeping the spirits of the team up at practices.

“He’s always in a good mood no matter what’s going on, even now that ‘this’ is going on, you’ll never see him walking around moping,” Taylor said.

Taylor went through a tough time with his transition to VSU, but he credits Peacock for helping him adjust, on the field and in the classroom.

“He’s probably the best coach I’ve ever had,” Taylor said I went through a rough patch coming down here, and he’s really the only coach that gave me shot to come back and play football. Now that I’m doing it, I wouldn’t trade it for the world,” Taylor said

Players under Coach Peacock, like Travis Taylor, have a close bond with him, but VSU Linebacker Zach Moore had some words to say about his coach’s condition.

“It’s just a bump in the road, and we’re going to deal with it like a family,” Moore said.

Coach Peacock has had an enormous impact on how the Blazers have performed so far this season and previous ones. The 6-0 Blazers probably wouldn’t be unbeaten if it wasn’t for the emotional appeal of Peacock on the sidelines.

Head Coach Kerwin Bell knows how important of a treasure Peacock is to the Blazers success this season and going forward.

“The program the last two years has been a lot based on his working ability,” Bell said. “His dedication to our program has been very special. He’s been behind the scenes doing a lot of work for us, and I hope he understands how valuable he is to us.”

Bell continued to praise Coach Peacock and his accomplishments at VSU.

“He’s given so much to this program, and we want to make sure we can give back and do what we can do on our part throughout this year,” he said.

VSU’s outstanding 2018 season has been fueled with a desire to, “Do it for Coach Peacock,” and the Blazers have just become more of a family throughout this tragic event.

According to Bell, Coach Peacock still continues to assist the team with weekly meetings and pre/post game wraps.

“Shoot, if you’re not feeling great that’s fine not being here, but I want you here to sort of get your mind off everything and come be with us,” Bell said.

The entire team and coaching staff have come together to support Coach Peacock as he endures this long and hard-fought journey, and the VSU family will always be grateful for his dedication and tireless efforts.