Home / Sports / Nothing less than a classic 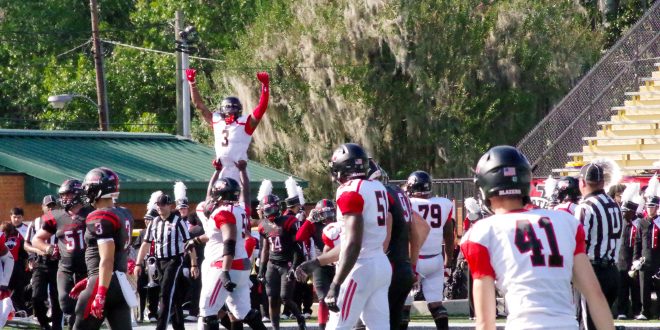 Nothing less than a classic

Two rival teams, both with unblemished records, stand in the way of each other’s goal.

No.5 Valdosta State will face No.3 West Georgia this Saturday in the regular season finale, and the anticipation is impossible to ignore.

All year long, VSU has been the anomaly. Nobody foresaw this 9-0 freight train coming after their 5-4 finish in 2017. They’ve spoiled viewers and demoralized teams by detonating 50-point explosions with regularity. They execute plays with a smooth abrasiveness all while displaying no weak spots in their game.

As they blazed through teams, West Georgia was also handling business, climbing high up the AFCA rankings. Wolves Head Coach David Dean is in his second season and will return to Bazemore-Hyder Stadium for the first time since his departure in hopes of keeping the Peach Basket away from the program he once brought two national titles.

But there’s more to this game than that Peach Basket, and honestly, that may be the last thing on their minds. The end goal for both programs is not just a GSC title but a national title, and the winner of this rivalry will receive a huge morale boost before beginning their postseason run—especially after both teams already pounded last year’s national runner-up in West Florida.

Since week one, the Wolves have been ranked higher than VSU in the national polls, but it’s hard to see them as the favorite for this game based solely on ranking.

Both teams are undefeated juggernauts, but they’re nowhere near the same.

Compared to UWG, the Blazers have 325 more yards of total offense in 92 less plays and average 85.6 more yards per game.

VSU has collected 32 sacks and only allow 10, while West Georgia only has 18 sacks and allowed 19.

Valdosta State’s headliner is Quarterback Rogan Wells, the sophomore with 35 total touchdowns. But he isn’t the sole reason for their success: he has an array of options around him. Like standing in the candy store, everything around him is good. He just has to decide what to go with this time.

One similarity between the two is that they both have a vicious defense. West Georgia allows a GSC leading 275.5 yards per game and 16.3 points per game. VSU averages 19.7 points and 337.9 yards against them.

UWG has a big, strong defense that teams just can’t find a way through or around. They don’t disrupt much in the backfield or apply a bunch pressure to the pocket. They just make it very tough to find positive yardage against them.

However, there is no defense that operates quite like VSU’s Black Swarm. The Swarm is fast and greedy, always making it a point to corral the ball carrier and make a big play. They’ve proven this all year and even last Saturday against West Florida, where they essentially put the game away by forcing two interceptions.

The Black Swarm will be the backbone for the Blazers from here on out and especially this game. VSU Head Coach Kerwin Bell has built a well-oiled machine in his third season, and this season could be the most memorable one in program history, but it all begins with winning this game.

The collision of these two teams is destined to be an instant classic.

Kickoff is on Saturday, Nov. 10 at 7 p.m. in Bazemore-Hyder Stadium.

You don’t want to miss this one.

Previous Blazers come home winners, Anderson captures individual title
Next Letter to the Editor: Turn on the light and vote