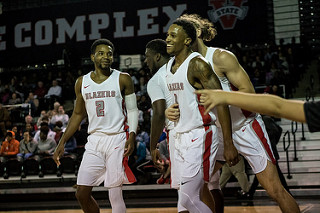 VSU’s Keshawn Ingram is no stranger to shooting three-pointers, and last night, he showed us why.

“It was all preparation, honestly,” Ingram said. “Coach always wants me to shoot the ball when I get it, so I just make sure my feet are ready.”

As Ingram’s season-high 20 points led the way for the bench unit, the Blazers demolished the winless Albany State Rams in a 127-92 victory on Thursday evening.

The Blazers high powered offense was in full effect against the Rams, shooting 62.3 percent from the field, drilling 16 3-pointers and tallying 30 assists on 43 made shots. Ingram has a game-high five three-pointers.

It was the work of the reserves that allowed the score to skyrocket, leaving Head Coach Mike Helfer in awe.

“What was most impressive about today was we saw guys like Keshawn Ingram, who hasn’t shot it like that yet, prove he’s a very capable shooter,” Helfer said. “Dez (DeRamus) is doing his thing. We’ve got a lot of different guys that we can piece in there to help us at the offensive end.”

The Blazers second unit outscored the Rams bench 51-37. Ingram credited his big game to the fans.

“As soon as the threes kept going for me, the crowd just got lit,” Ingram said. “I knew from then that it was going to be a good night for me.”

Winston Morgan praised the depth of the Blazers rotation.

“We are very deep,” Morgan said, who scored 18 points on the night. “This year, we have more than enough guys that can come in and not lose a beat for us. Anyone on the bench right now can come in and give us a good game like Keshawn (Ingram) did tonight and Dez (DeRamus) on Tuesday.”

Beau Justice, reigning Gulf South Conference player of the year, dropped a game-high 26 points in the matchup, leading five other Blazers in double-figures.

Justice redeemed himself after a slow first half against Tuskegee on Tuesday night, pouring in 19 points in the first half, burying two triples in 17 first-half minutes.

Morgan made it imperative to help Justice get out of his first half slumps.

“He is the player of the year, so I am always trying to get him going no matter what,” Morgan said. “It’s our last year together so whatever it takes get a ring, we are going to do it.”

The Blazers were running and gunning all night long, yet one play sent shockwaves through The Complex.

DeRamus dribbled down the sideline near the Blazer bench, staring into the soul of defender Titus Burns on his way. DeRamus elevated just outside the lane, seemingly getting higher each second of air time, before missing a violent poster dunk attempt.

The Blazers’ bench, and the fans witnessed a dunk that would’ve been.

“Somebody hit the boost button and boosted him on up there a little higher,” Helfer said, chuckling. “He’s probably in the top three of most athletic players I’ve ever coached. You saw it there, and he’s going to continue to bring that every time.”

Clay Guillozet had 15 points and six rebounds and DeRamus added 10 points and seven assists as the Blazers scored 30 points off 15 Albany State turnovers.

The Blazers shot 61.8 percent in the first 20 minutes compared to 46.2 percent for the Rams.

Mario Young, Randy McClure and Tyrell Williams each scored 17 points to lead the Rams. It was not enough, as they have now lost three straight games to start the season.

The Blazers will host the third game of their five-game home stand facing Brewton-Parker at The Complex. The matchup is slated to begin at 7:30 p.m. ET.