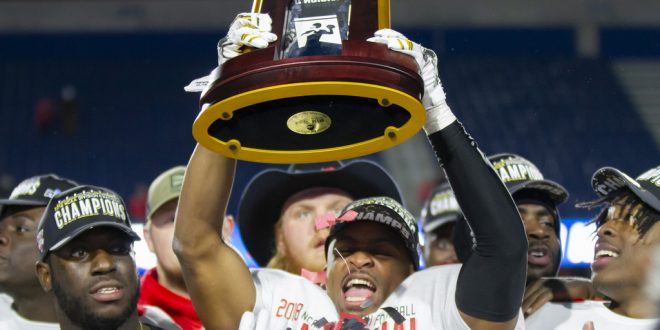 The Blazers provided one of the most exciting seasons in recent history. The Spectator Sports staff decided to give our top play from this year.

In the Division II National Championship game against the Ferris State Bulldogs, VSU dialed up a play that we haven’t seen all year.

Rogan Wells and the Blazers then trotted out after the timeout and I noticed freshman backup quarterback Ivory Durham was out on the field as well.

So something special was about to happen but what followed was something that I would’ve never predicted.

By this time in the ball game I forgot how my editor-in-chief, Juston Lewis, pointed out to me that Wells was catching passes in pregame warmups. I didn’t really think it was significant, and I was wrong.

The Blazers then lined up with Wells in shotgun and Durham was out wide to his left.

Durham is thrown in motion, and before I registered what was going on, the ball is snapped.

Wells gets the snap and while Durham crossed, he handed the ball off to him.

Durham took it and rolled out toward his right, staring at a receiver running down that side of the field.

Then a receiver started to streak down the left sideline, it was Wells.

Wells hadn’t even passed the 20-yard line before Durham turned his head to him and lofted a beautiful touch pass in his direction.

As the ball floated, Wells turned on another gear and got a step behind his defender around the 10 yard-line.

The ball gracefully dropped into his hands at the five yard-line with his back to the end zone. Wells then tip-toed while turning himself around as he crossed the plane for a touchdown.

After witnessing that live, I couldn’t find any words to say. All I could do was put my hands on my head in complete awe.

That was VSU’s last score of the game and they went on to win the championship 49-47.

Even though the Blazers had a season filled with highlights, this was easily their top play of the year simply because of its significance and breathtaking execution.

The top play of the year goes to David Brown’s 100 yard interception return in the semifinals against Notre Dame College.

Coming out of halftime, it seemed inevitable for the Falcons to punch in a touchdown as they marched to the five yard line.

That’s until they lined up in the shotgun formation.

Brown sat on the pass and was rewarded with an interception, that ultimately turned into a pick six.

I’m not sure if the Blazers even see the national championship without this play since it turned the direction of the game in the Blazers favor.

The Blazers outscored the Falcons 21-7 in the third quarter and Brown’s pick six struck the first blow that set the tone for the second half of the game in which the Blazers prevailed 30-24.

Remember, the offense were not playing up to their normal par this game so a lot of the weight was placed on the defense’s shoulders.

The Blazers needed this play.

It gave the offense breathing room to open up their playbook which led to them scoring two touchdowns in the third quarter.

You don’t hear many talk about the clutch gene in football, let alone on the defensive side.

But Brown’s knowledge of the Falcons’ offensive strategy and acceleration to go the distance, giving the Blazers a 16-10 lead definitely qualifies.

Being the highest scoring offense in Division II typically means you know how to score in a variety of ways and the Blazers are no different. From Diving touchdown receptions, interceptions returns, trick plays or a break-away run this team could excite in the blink of an eye.

The play I’m choosing is from the Gulf South Conference championship game against West Georgia. As it should, being the cap to an undefeated regular season and probably the most exciting game this season.

The two undefeated teams met in the final regular season game to decide who would hoist the conference title, peach basket and top seed in the Super Region Two rankings.

It should be noted that this game broke the single game attendance record this season with 10,558 people packed into Bazemore-Hyder stadium in addition to it being streamed by ESPN. The bright lights were on and the Blazers shined.

The game should forever be known as Ivory Durham’s ‘coming-out party’ as the true freshman had two touchdowns that had major implications. In fact, his 53-yard scramble for a touchdown is probably the play that swung that game for the Blazers.

Durham’s pass to Kenny Benjamin in the second quarter became a staple for the Blazers throughout their post-season run and was even used on the final touchdown of the season for VSU.

The play that I’m choosing isn’t from Ivory, though.

I’m going with the player that carried the Blazers all season—Rogan Wells.

Wells was voted Offensive Player of the Year in the GSC, largely in part of his command of this high powered offense, but also because of him always rising when VSU needed him.

In the fourth quarter leading by six, VSU signaled for one of the frequent calls of this team. Rogan took the snap and followed as his linemen as they pulled in front of him providing lead blocks getting him into the Wolves’ secondary.

Once in the secondary, Wells accelerated past the defenders and 55 yards later was in the end zone.

The play wouldn’t come off as special if you just take it at its base. It’s a simple quarterback counter. It was a call that has become a staple of the offense. It was executed to perfection, sealing everything on the first level and Wells’ athleticism taking care of the rest.

It was special though. It was Rogan Wells rising to the occasion once again. It was VSU completing the second undefeated regular season in program history. It was Kerwin Bell, who took over David Dean’s program after his departure, defeating Dean and defining his own era of VSU football.

That’s why that play, from that game is the play of the year, at least to me.

Previous What’s Your Take: How VSU became the best in the nation
Next Three-and-out: Bell leaves Blazers for Bulls