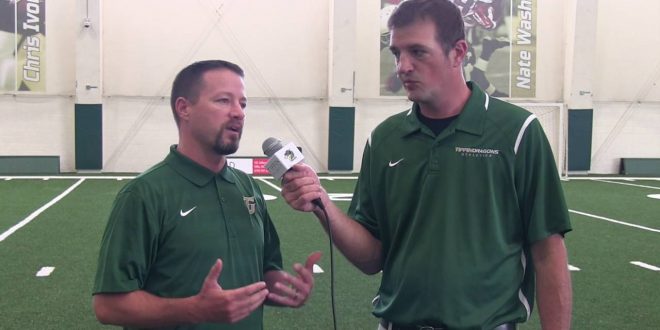 Valdosta State Football will be coached by Gary Goff. Goff is a VSU alum and former head coach of Tiffin university where he had a 39-49 record.

Goff is a VSU alum who helped carry the team to a 1996 Gulf South Conference championship and the No. 1 ranking in the nation during the 1996 regular season.

He has been the coach of Tiffin University in Ohio for the past eight seasons and compiled a 39-49 record in that period.

The Dragons improved their record nearly every season under Goff’s tutelage starting from 0-11 in his first season to 9-2 in his last.

Coming off of his best season at Tiffin, the Dragon’s averaged 30.2 points per game, 425.4 yards per game and finished in the top five in passing and rushing yards in the Great Midwest Athletic Conference.

Now that he’s at Valdosta State he’ll be inheriting the highest scoring offense in Gulf South Conference history. The team that averaged 52 points per game and 523.9 yards per game.

He has the virtue of working with the Harlon Hill trophy runner-up Rogan Wells who will be entering his junior season for the Blazers next fall.

Wells recorded six total touchdowns in the national championship game—the most ever by any player.

The offense should also be returning their top three receivers and their running back tandem.

The rest of the team won’t be as comforting for the new coach.

On the opposite side of the ball, the Blazers graduated nearly the entire defensive unit. Raymond Palmer, David Brown and Stephen Denmark will no longer be a part of the Black Swarm leaving holes in the secondary while Guito Ervilus’ and Iseoluwapo Jegede’s departure leaves holes on the defensive line.

The Blazers are also facing a deficit in special teams after losing kicker Andrew Gray and punter Gavin Wilson to graduation.

If the pressure to achieve wasn’t high enough, national signing day is less than two weeks away.

Goff reportedly has an introductory team meeting scheduled with players on Friday. His official press conference will be on Jan. 29 at 11 a.m. in the P.E. Complex.

Previous What to do when you have no clue: A guide for the undecided
Next New year, new coach, same expectations