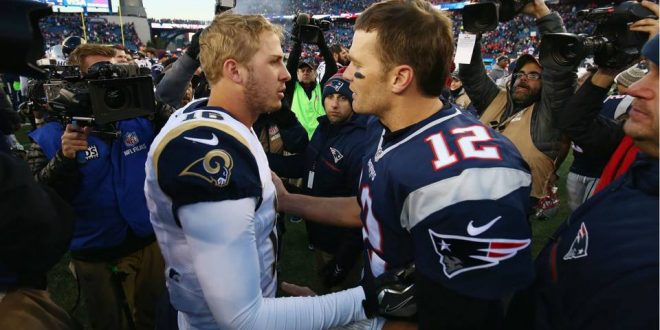 Tom Brady will appear in his ninth Super Bowl of his career. Jared Goff will play in his first.

The picks are in! Eyes are on Atlanta as the Spectator Staff offers up their picks for Sunday’s big game.

Patrick Barry, Staff Writer: “Well the Patriots played in the last two, and won two years ago… so that’s pretty good I guess.”

Seth Willard, Multimedia Editor: “Rams. I hate the Patriots, I can’t be on record picking the Patriots. I’d rather be wrong.”

Leah Morton, Copy Editor: “I’ll just go with the Patriots. They seem to be in the Super Bowl a lot, like every year.”

Bethany Davis, Graphic Designer: “I like animals. Let’s go with the Rams.”

Jacorey Moon, Special Projects Editor: “I don’t know. Probably the Patriots. Don’t they win a lot of those things? I don’t know.”

Peyton Fletcher, Campus Life Editor: “Patriots or Rams? Patriots. Because I identify with that.”

Bryce Etheridge, Managing Editor: “Go Rams. Get these Patriots out of here.”

Robert Davison, Special Projects Editor: “Until Tom Brady hangs his cleats up, smart money is always on the Patriots.”

Prince Robinson, Sports Editor: “Tom Brady is the greatest quarterback that ever lived. The only way the Rams can beat the Patriots is to get to Tom Brady, and this is his best O-line in forever. Plus it’s in Atlanta. He hates Atlanta.”