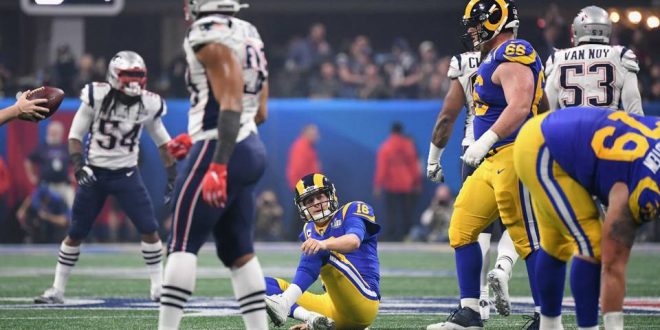 Sunday evening, Super Bowl 53 was in full effect with the Patriots defeating the Rams 13-3 in a very low scoring affair. The hype did not reach its expectations. Here are some of takeaways from the sports desk:

Offense: Sean McVay’s offensive brilliance was nowhere to be found for all four quarters. Jared Goff looked as if he had never played football in his life, while Bill Belichick singlehandedly took the Rams offense off the field every possession. I was not expecting Todd Gurley to have only 10 rushing attempts. The only great sign from the Rams was punter Johnny Hekker booting a 65-yard punt, the longest in Super Bowl history.

Defense: The Patriots’ defense was phenomenal. Even though Tom Brady wasn’t at his best, the Pats still made adjustments to win the game. The Rams, on the other hand, couldn’t pass, couldn’t run and were horrible all around. Both defenses showed up.

Wrap-up: I can honestly say that Super Bowl 53 was, by far, the worst Super Bowl of this generation. If you like defense, well, that was the game for you.

Offense: Goff was distraught with the array of looks the Pats’ defense gave him, and the Rams couldn’t even score a touchdown. But what stuck to me was that they didn’t run the ball like they should’ve. They probably watched the halftime show instead of going over what plays they needed to run to get Gurley going. Playing like that, they must’ve wanted to lose.

Defense: LA’s defense was let down and had to be steaming hot after watching the offense do nothing except get in field goal range ONCE.

Wrap-up: Too young, too soon. That’s the reason New England won the Super Bowl, as many should’ve expected. The Rams were too young, as far as their head coach and quarterback goes, and their time came too soon. If no team learned from the Falcons, they can now learn from the Rams. You MUST get the run game going to beat the Pats in the Super Bowl!

Offense: Two teams, surrounded by controversial finishes in their respective conference championships, meet in the Super Bowl and lay an egg. Not a goose egg though, just an egg.

Defense: When Brady’s first pass attempt was an interception, it almost felt like the prophecy would come true. LA proceeded to punt eight straight times en route to the most anticlimactic sports championship matchup in history.

Wrap-up: The Rams’ final possession was a missed field goal. In a season where field goal misses have dominated the national media stream, this might actually be fitting.

Offense: The only bright spot fell on the Patriots’ Julian Edelman, who had 10 catches for 141 yards. The Rams, however, didn’t do anything. Goff and McVay didn’t play well. They had the best offense throughout the season but only scored three points in the biggest game of the year. Gurley has to be injured because there’s no way McVay preferred C.J. Anderson over Gurley.

Defense: Both teams held up. The Rams played good, but their fate was inevitable against Brady, and the Pats’ touchdown took them out of the game.

Wrap-up: Coming into the game, I was not expecting a scarcity of scoring. I wanted a 31-27 Rams victory, but I am also realistic and acknowledge the greatness of Brady. The scarcity of scoring kind of killed the game for some, but I felt like it added suspense to the game as the audience waited for a team to take the momentum.