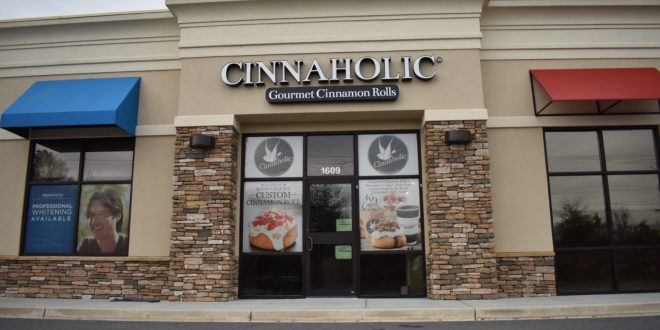 Cinnaholic sits in the plaza across from Lowndes County High School in between Aspen Dental and Urgent Care. The dessert shop plans to serve customizable cinnamon buns as well as coffee.

Dessert shop, Cinnaholic, is coming to the greater Valdosta area, and it isn’t your average sweets stop, according to manager Garrett Garland.

Cinnaholic is a gourmet cinnamon bun store where customers can create their own cinnamon bun. It sounds similar to Cinnabon, but Cinnaholic’s ingredients are purely vegan. It also serves coffee on the side.

“We have a vegan product, which is individually crafted right in front of you, and watching that process done itself—as I already have in Atlanta—is a breathtaking experience,” Garland said.

Though the store isn’t complete yet, Garland said he’s excited for its full release. With the closures of Marble Slab Creamery and Dough-Jo, there were worries of the store’s future. But there’s one thing he wants Valdosta citizens to know for sure: Cinnaholic isn’t an ice cream store.

“I’m sure everyone loves ice cream [but] it’s so saturated in Valdosta, as we have Snowpocalypse, The Mix and every other ice cream parlor, which—for a lack of words—is a large amount,” he said. “There’s not exactly a cinnamon bun store here.”

Currently, the manager and the store’s investment partners are looking at drawing in the 60 to 100,000 people coming through Valdosta daily.

With the store sitting right across from Lowndes County High School, Garland said he’s expecting many high schoolers to venture in but is expecting more females than males as customers.

“It’s not directly geared toward them, but we’re looking at a more female customer index,” he said. “We’re expecting about 60 to 70 percent more females than we’d expect males to enter the store each day.”

Even without a large amount of male customers, Garland is expecting to be busy long after the store’s opening, especially considering it’s surrounded by a “fast food mecca.”

Investments into the store began in December, but it officially broke ground on Jan. 20. Wiring, concrete breaking and replacing has already started in the store’s building on Norman Drive. It is still waiting for electronics and lighting, ovens and kitchenware.

Garland said he is also planning for a mural to be painted inside the store.

Cinnaholic started as a simple cinnamon bun store in California and has risen up to become Forbes 10 Best Franchises to buy from Shark Tank.

The store’s current investors saw Valdosta as an up and coming city, especially with the arrival of Cook Out and Panera Bread, and decided with no other bakery like it, they’d bring Cinnaholic here.

Garland was brought on board for a chance meeting with the investors but had to take a break from being a student because of it. He is currently a freshman at Valdosta State University and taking a semester off.

“Since [the opening is] going to be in late March, early April, it’ll give me plenty of time to start out with our grand opening [and] put in 120 percent,” he said. “Then, as soon as we die down, which we hope that we can in a small amount, I will be able to do up to roughly 15 to 18 hours at VSU in constant.”

Garland is planning for Cinnaholic’s opening during either the last week of March or the first week of April. It’s located on Norman Drive next to Aspen Dental.