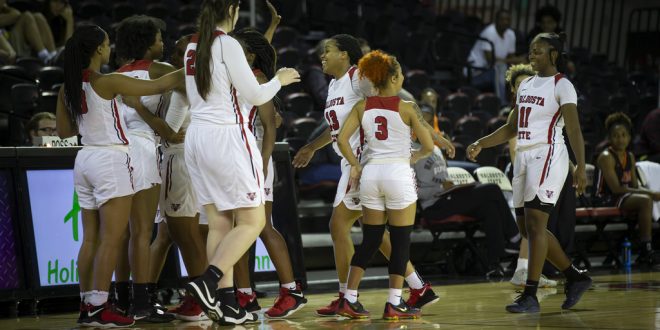 The Lady Blazers did will be heading back to the Gulf South Conference playoffs as the No. 5 seed. They will face No. 4 Delta State on the road on March 5 at 6:30 p.m. ET.

In their last regular season game, the Lady Blazers’ seniors were all smiles versus Auburn Montgomery.

The 64-50 win on Thursday evening was as emotional as any game this season. Senior Sonya Franklin tried her best to keep the rest of the seniors from folding.

“We have a saying called ‘lift up’, where we just try to keep everyone lifted up and smiling,” Franklin said. “So what you missed a layup, pick yourself up and keep playing.”

The mantra applied to the offensive side of the basketball, but on defense, they were stout all night long. The Lady Blazers forced 21 turnovers against the Lady Warhawks.

AMU’s Makaylla Bullard had nine turnovers in the game, the same amount as VSU as a team.

The VSU defense is at its best during quick switches and getting deflections. Bonilla was the primary defender on Bullard and it proved to be hectic for the Lady Warhawks.

Franklin and others went on to score 20 points off those turnovers.

In the paint, the Lady Warhawks had no answer for VSU allowing 44 points. Senior Kendra Green scored 10 points down low for VSU.

For the game, Franklin tied with AMU’s Victoria Morales with a game-high 17 points. Unlike Morales, Franklin was dominant on both ends of the floor, grabbing three rebounds and four steals.

“I just wanted to leave it all out here because there is a possibility that this is my last time on this floor,” Franklin said.

The Lady Blazers did will be heading back to the Gulf South Conference playoffs as the No. 5 seed. They will face No. 4 Delta State on the road on March 5 at 6:30 p.m. ET.

In their two meetings this season, it was an even split with VSU winning 69-60 on Jan. 12 and DSU getting a victory on Feb. 16.

Franklin scored a combined eight points in the meetings.

“We just have to control what we can control,” Franklin said.