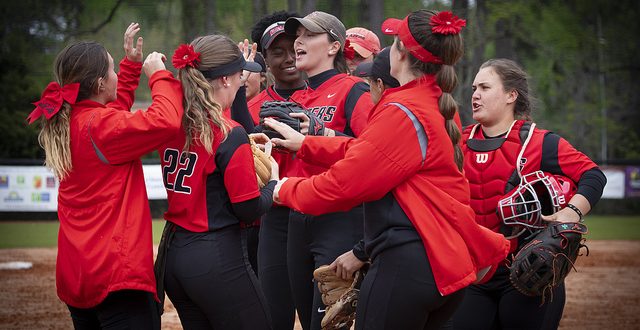 VSU Softball's pitching staff has made a name for themselves early but the team can drop bombs as well.

With the talents of Kasie Johnson, Caylie Van Auken, Giovanna Watts, and Avery Lamb, the pitching staff receives a lot of praise, as they should.

But after Valdosta State’s double header against Eckerd and witnessing Haley Garrett’s walk-off homerun in the bottom of the 7th inning, this ball club made it known that they should also be feared when stepping to the plate.

After Natalia Bellinger hit two homers against Eckerd, she became the ninth Blazer to hit at least one home run this season.

VSU leads the Gulf South Conference with 30 home runs and is 12th in the nation for home runs per game with 1.13.

The team is stacked with dangerous sluggers.

Jordenne Gaten and Kiley Robb each have six home runs which lead the team, and they both have a .500 slugging percentage or better.

Garrett holds the highest slugging percentage on the team with a .603 and has hit five homers. Dream Aaron is also a bomb threat, but teams shy away from throwing to her, so she hasn’t been able to increase her home run total.

These Lady Blazer’s feed off the long ball and when a player blasts one over the fences a sense of exuberance spreads throughout the team.

This was on display in their third matchup against West Florida.

After dropping both games in the doubleheader to WF, VSU was facing a series sweep while down 3-0 in the fifth inning.

Life was brought back to the club after Gaten hit a single homer to left field and put VSU’s first point on the board. Then Robb stepped up to bat with two on base and hit a moon shot that put the Blazers up 4-3.

The team’s morale completely shifted for the better and anybody in attendance could see it. The energy and confidence showed in their dugout and on the field.

Johnson did was she does best and finished off West Florida by not letting them score again, and VSU walked away with a much-needed W against the No.2 team in the nation.

It’s obvious that this team swings for the fences, but sometimes that can come back to bite them.

Looking back at the series against West Florida, one of the best hitting teams in the GSC, the contrast between swinging for the fences and swinging to get on base really showed.

WF hit more line drives while VSU hit more pop flies for easy outs and that hurt the Lady Blazers significantly in the double header, where they lost 6-3 and 4-1.

Head Coach Thomas Macera has mentioned that they needed to improve on hitting after it was a problem during the Mississippi College series earlier this month.

After looking at the numbers, there’s plenty of room for improvement.

The Lady Blazers have one of the worst batting averages and the lowest total of hits in the GSC. Now it’s impressive that they’re one of the best clubs in the nation even with those numbers.

They just haven’t honed the art of base hitting to their repertoire yet, so just imagine if they do. With fast runners like Bellinger, Garrett, Gaten, Taylor Strickland, and more, this team could look unbeatable on paper.

VSU is a softball powerhouse and between the talented players and experienced head coach, expect to see those improvements, and certainly expect to see more bombs.