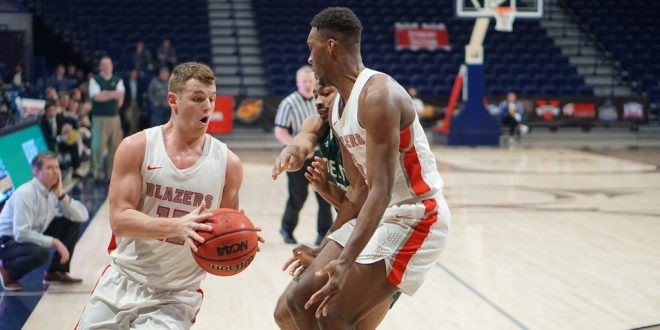 The Blazers will be play next season without Justice as he is set to graduate in May.

Year in and year out, the Blazers are one of the supreme squads in Division II hoops.

The fine basketball acumen of Head Coach Mike Helfer coupled with a typically elite roster should be the ultimate mix for a national title.

It should be noted that Justice is the No. 1 option for the Blazers on any given night. For the past two seasons, he has combined to average 21 points per game.

Not too shabby for a go-to scorer.

VSU has been blessed to have Justice, yet his game and presence could be the reason for a daunting title run.

Taking a deeper dive into the box score from the early tourney exit, it should be stated that Keshawn Ingram and Darrell Jones were the only other double-digit scorers for VSU.

Winston Morgan and Clay Guillozet, who have been huge contributors the past two seasons, were relatively neutralized in the game.

Both combined for 17 points.

The Blazers are too reliant on Justice to shoulder much of the offensive load. Considering Justice has an off night, who would be the one to step up?

In the 32 games the Blazers played in this season, Justice was the game-high scorer 19 times.

One of those games was against Delta State in the Gulf South Conference semi-finals. Justice led VSU with 17 points.

The VSU fans hoped for a 19 point total from him, as he missed the potential game-winner to send the Blazers to the GSC championship game. The Blazers lost 70-69.

The Statesmen were aware that Justice was getting the ball in the situation. They forced him to take a highly contested corner three.

A contest that saw the ball clank off the front of the rim.

I understand why it happened, but in this situation, Morgan or another player could’ve taken the shot. No one will ever know the outcome now.

If the Blazers had been able to play as a balanced attack, a championship banner could be at The ‘Plex.

Not a knock on Justice, but the Blazers may regret being too dependent on his game.