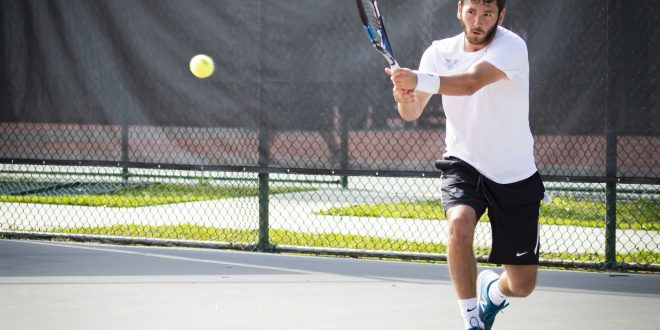 As Mas continues to adapt to American culture, his game ascends.

Why wouldn’t he? The No. 8 ranked singles player in the country has developed incredibly during his senior year, having VSU thinking about another conference championship.

Mas already has two under his belt.

Mas’ demeanor on the court stands out. Always on the front foot, looking to crash the net and hoping to outwork his opponent each and every match.

“I try to stay aggressive in the game, always playing the ball and attacking,” Mas said. “My strength is in my defense and athleticism, and I always want to go up and make the play.”

VSU tennis has Mas to thank for its new rankings, as it is rated no. 11 in the nation and second in the South Region.

But while Mas confidence exudes himself on the court, his story could’ve ended much differently as little as two years ago.

Growing up in Premia de Dalt, Spain, Mas stood out among many coaches and clubs as a potential professional going forward.

He worked hard and showcased his talents on multiple occasions. That was until he was eighteen, and decided to hang up his racket and quit the sport altogether.

“I became so nervous,” Mas said. “I was told so many times that I was talented that I hated to disappoint anyone. My biggest fear was giving 100 percent and still failing.”

The drive to perfection grew frustrating for Mas, and his nerves refused to allow him to have fun playing the game.

He began to take up coaching, helping the other kids grow, despite being one of the youngest coaches in the club. This phase went by fast for Mas.

“I hated being that young and coaching,” Mas said. “I knew I had more to provide.”

He was given a lifeline by VSU, but in particular by his longtime childhood friend, senior Xavier Pineda.

Mas knew Pineda since he was ten years-old, and was told about the opportunity to play tennis and get an education.

Mas came to VSU for a fresh start, hoping to get back on the court. He classified his English at the time as “not great” and felt that America was “very fast-paced.”

“Everything had a drive thru when I got here,” Mas said. “I was so used to going to restaurants and sitting down and relaxing, I needed to adjust to that.”

While adjusting to American culture, Mas also learned to settle his nerves on the court, blessed with something he never really had in tennis before: a team.

“My freshman year our roster had four seniors and some great assistant coaches, and they helped me settle into my game.,” Mas said. “I learned how to focus and handle my emotions before matches. I just wanted to play my tennis.”

The roles are reversed now, as Mas and Pineda are the only two seniors on the roster.

Mas knew the experiences these kids are feeling and how important it was to help them adjust.

“So many of the guys come from Europe,” Mas said. “One of our players is from the Czech Republic (freshman Robert Cizek) and I could tell he felt a lot of the same nerves that I felt when I was younger. Not a lot of us played on team’s growing up, and that adds more pressure, not wanting to let the team down. I knew I could help him and the other guys stay calm and just remember to play their game. That’s what is most important.”

The results have not disappointed one bit. Mas has made the Gulf South Conference Championship three times.

He has also been able to fine tune his game while in America. Spain, famous for their clay tennis courts, provided a stark contrast to the speed on the typically American hardcourts.

“The courts here really let me play my game well,” Mas said. “I can move faster on hard court and play even more aggressive than usual.”

15-7 now on the season for Men’s singles competition, one moment that stood out to Mas was beating Pierre Montrieul of Barry University at the beginning of the season, as the two have faced off multiple times throughout their collegiate careers.

“He had beaten me five times in a row,” Mas said. “It felt great to get one up on him finally.”

Now, VSU is the favorite to win their third conference championship and make a run at the regional and national titles.

The Gulf South Conference Championship tournament will take place May 2 through May 4 in Montgomery, Alabama. VSU is number one seed in the conference tournament.

Mas and the rest of the squad will be ready, no matter the opponent.

Previous Blazers finish No. 2 in GSC championship
Next Column: This generation yearned for Tiger Woods