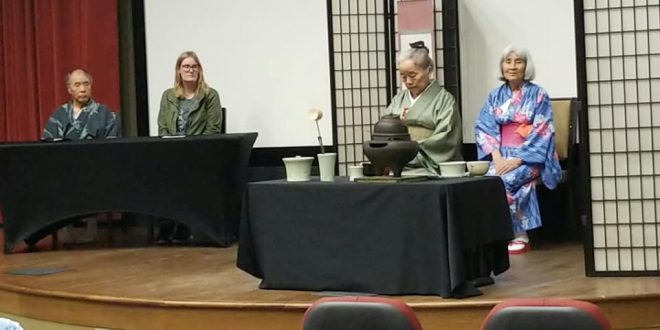 The Japanese Club allowed VSU the chance to see how a traditional tea ceremony is hosted on March 28.

Japan has long been steeped in vibrant culture and customs, but what Americans see of the Land of the Rising Sun is often not representative of its people and values.

The Spectator sat down with senior Jacquelynn Trapani, president of the newly-founded Japanese Club, which celebrates Japanese culture on campus and abroad.

What is the Japanese Club’s mission?

Trapani: “Our mission is to spread Japanese cultural appreciation. We want to introduce new people to Japanese culture, and for people that are studying language here or informally, to give them a chance to practice because it is kind of hard to find native speakers on your own.”

Do you speak Japanese?

T: “Yes. I took a year here, and then I studied abroad and took another year at a school in Japan. There is another school that is kind of partnered with VSU. There’s a thing called the ‘Oberlin Go’ Program. J.F. Oberlin is a school in Japan that sends us students through the ‘Go’ program, and then we can send students to them.”

How old is the club?

What was the inspiration for the club?

T: “So, a couple of semesters ago there was a Japanese teacher on campus named Natsumi Hayashi, and she was a huge influence on the community. She was the adviser for the Anime Club, and she also helped out with the international community events. She had her hand in a lot of pots.

She was really good at getting people to do things, and so when one of her students wanted to start a language and culture club, we tried to start it before she left because she had a visa with a termination.

It’s her legacy. We’re trying to keep the community that she created together.

It is very rare to have any sort of Japanese program in South Georgia. It’s super rare. So, keeping any kind of community alive for Japanese culture out here is really the name of the game.”

What events have you had so far?

T: “I think our most popular event we have had so far was the tea ceremony. We’ve had a couple movie showings that were pretty popular because we often will find a couple of interesting movies. We used to get movies sent to us from the Japanese Consulate in Atlanta, and those are usually more serious, deeper dramas. Usually the ones we pick just to showcase for our members are more fun.

Part of it is the joy of sharing it with people who are also interested.”

What is the history of the Japanese tea ceremony?

T: “It’s kind of hard to know where to start with the tea ceremony, but it’s probably one of the most famous Japanese traditions. You’ve got ninja, samurai, bow and arrow, and then inevitably, tea ceremony. The history of it goes all the way back to ‘samurai-on-the-battlefield’ levels of history. At some point, someone brought tea back from China, and it became this super high-class thing, like a status symbol. The ritual became very specific.

Back then, it was more of a men’s tradition. But when merchants start rising into the middle class, and families want to have these elegant, cultured daughters, it kind of becomes more of a woman’s thing.

Normally the tea ceremony takes a lot of preparation, and you can only have one small group at a time because you have to prepare the tea individually, and then serve it, they have to approve it, then you take it back and serve it to the next guest. It’s all about a very slow, quiet process.”

T: “I think that the tea ceremony is connected in a way to VSU. Our school was originally a frontier finishing school, and the tea ceremony, especially nowadays, is considered sort of a women’s finishing sort of hobby, so it’s sort of fitting in a way. Also, the Tallahassee Asian Community comes out and helps us with the tea ceremony, and then in October, when they have their Asian Festival, we’ll go out and help them, so it’s a good way of connecting the two communities.”

How many members do you have?

T: “We try to have events pretty regularly, so the numbers are pretty up and down. We have at least 20 members but about 10-15 core members who come often.”

Is the club starting in response to more Japanese students on campus?

T: “If anything, it’s more an effort to keep the ones that we have. The Japanese schools have seen a decrease over the years in students going abroad, and I think that having some kind of network to integrate them better into the school gives them more chances to enjoy American culture.

It’s probably very scary to go to a new place, and it easily could be a bad experience, and that’s someone who chooses a different school to go to.”